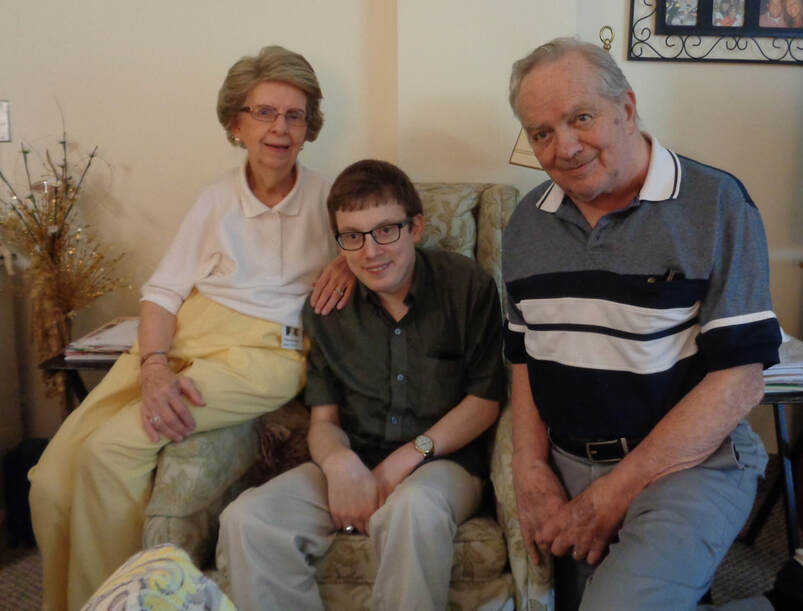 I spoke with Carl and Theresa Klan at their apartment at Sarah Reed Retirement Home. They are lifelong members of St. Stanislaus Church.

Theresa’s parents, Stanley and Anna Rydzewski Przybyszewski were born in Erie, and they made their home at 537 East 14th Street.
Both of her grandparents were born in Poland before settling in Erie.

Her father, Stanley, worked at Odin Stove and at part-time jobs here and there.
Theresa had one brother, Bernard, and three sisters, Florence, Irene, and Otillia (Tillie.) (Theresa was born August 1, 1928.)

​When they started school at St. Stan’s there was no kindergarten and they didn’t wear uniforms.
They were taught by the Sisters of Nazareth.  The hardest nun was Sister Justa.  Theresa had fond memories of Sister Ludwina in 3rd Grade.  She was chubby and jolly.  If you wrote too close the margins she would come over with her pencil and say, “kinky dinky!” You received a lot of 100’s from her! Theresa also remembers Sr. Ludwina would give them a huge jar of Kool-Aid that they would all drink out of.
At school, you learned to be good.  The nuns were strict enough and scared all your bad habits away!  And Theresa said she also had very good parents.
Theresa remembered being an angel in the school plays and playing hopscotch and jump rope with her friends.  Her friends were Florence Loncki, Theresa Jaskiewicz, Doris Inter, Margie Janczewski, Sophie Tatara, and Theresa Malinski.

Some of the boys nicknames she knew were Baldy, Blacky, Nook and Silver.  Also, Nookie for a girl.

Her remembrances of St. Stan’s Church growing up was whether it was summer of not, they always had a First Friday Procession. Theresa and her sisters processed together, and their mother always had candy from Polaski’s for them after.
At the Novena to St. Theresa, the Church was always full, and it was beautiful!  On the last day of the Novena, they gave out roses.
​​
The neighborhood had her favorite corner stores and bakeries.  Mendelewski’s had a little bit of everything.  When flannel came in, everybody came to shop.  She remembers Mrs. Mendelewski had a wig that shifted!
Polaski’s had candy,  eight or nine for a penny! Theresa thought someday she would have a whole nickel for a candy bar!
Walter’s Bakery was delicious and at Star Bakery, when that fresh bread came out of the oven, boy what a beautiful smell!

Theresa’s family didn’t have Christmas Wigilia, just Easter Swieconka.  All her Christmases were special.  The children didn’t receive many gifts, maybe just a coloring book and crayons to share, but they didn’t mind.

Theresa attended Academy High School after her family moved to 23rd and Wallace.  Her first job was at Erie Laundry folding laundry for $14 a week.  It was the other side of the tracks between Ash and Reed.  It was very hot work, and Haibach’s Meats were behind them.  The smells!

Carl Klan was born on October 27, 1928 and was grew up at 606 East 12th Street.   His parents were Antoni and Helen Rybinski Klan. He had a brother Joe (who directed a band,) and sisters, Mary (organist at St. Stan’s,) Helen, Ann, Hedwig, and Cecelia (who was handicapped.)

Carl worked at U.S. Printing and Lithograph as a dot etcher. He was also a wonderful landscaper.  He decorated for Fr. Bernie Urbaniak’s first Mass and also for Fr. Cas Wozniak’s first Mass at St. Stanislaus.  Carl was very active in the church.  He and Theresa also sang on the Choir.

Carl and Theresa were married on August 6, 1955 at St. Stanislaus Church. There were also two other weddings on that day.  Their wedding was officiated by Msgr. Stanczak and Carl’s Uncle, Fr. Rybinski.  The reception was held at the Polish Foresters Club.

Carl and Theresa lived on 11th Street for fifty-eight years, in a beautiful four-bedroom brick home.  They are the loving parents of Susan, Barbara, and Christopher, all adopted from St. Joseph’s Orphanage. Sadly, they had to move from their home to an apartment after several break-ins.

Theresa and Carl loved attending daily Mass at St. Stan’s and led the Rosary on Tuesday and Wednesday mornings. Theresa would hate to see the old ways die out; she especially loves all the Polish songs.

Carl is now suffering from dementia but is devotedly cared for by his wife Theresa and their children.  Carl still has a great sense of humor and entertained me with his jokes.

Theresa affectionately said that Carl never lost his religion and remembers all the songs and prayers.  He is a wonderful man and father.

It was an honor getting to know and interview these wonderful people! 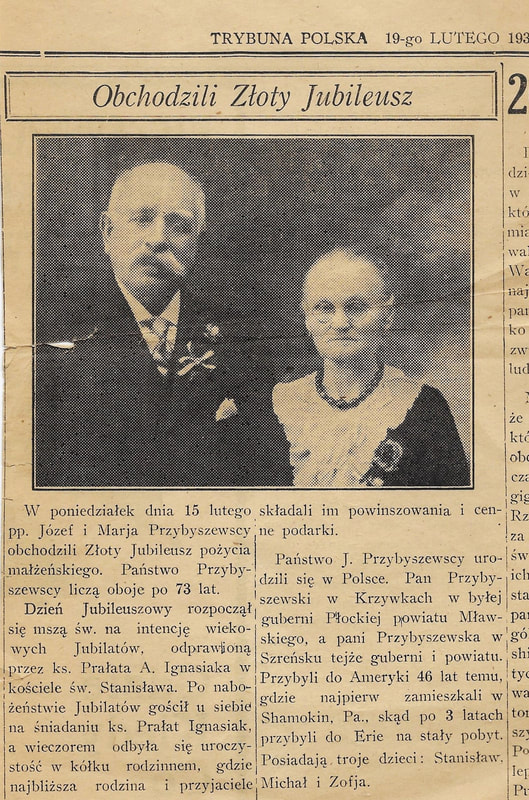 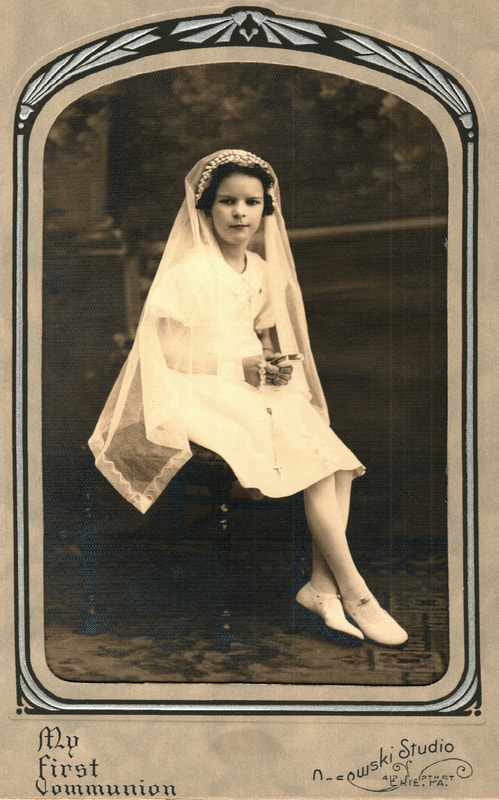 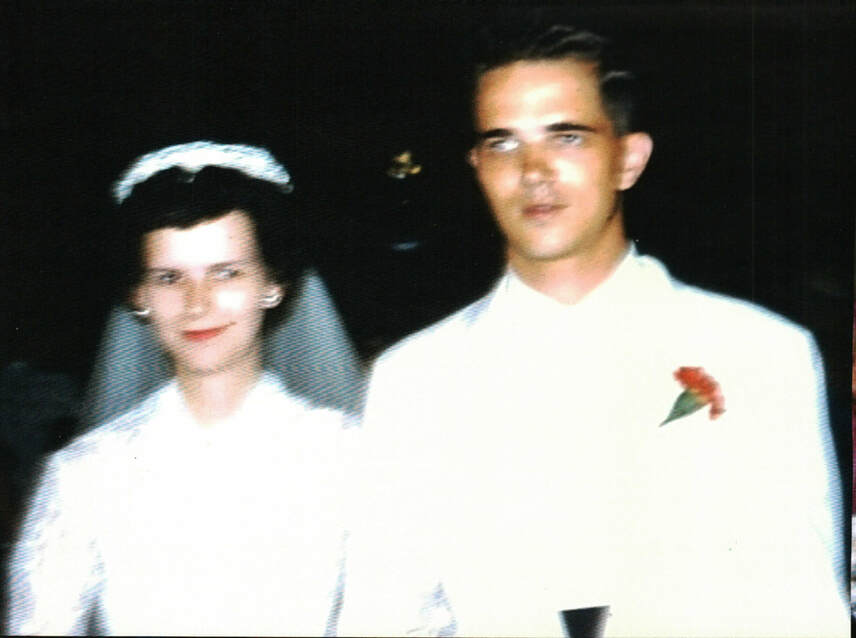 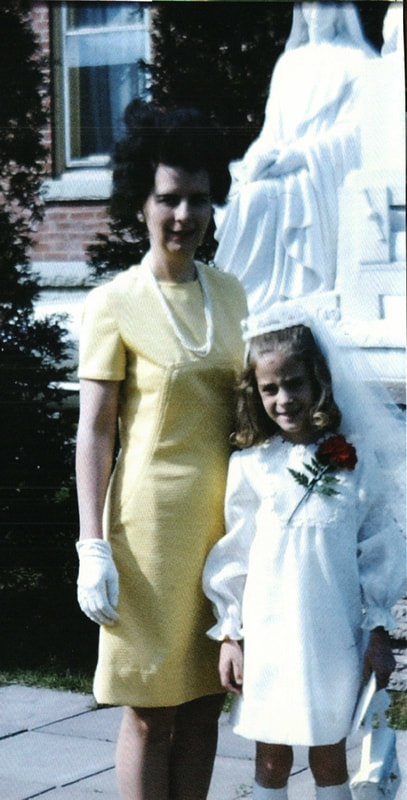 Theresa and her daughter Susan on Susan's First Holy Communion. 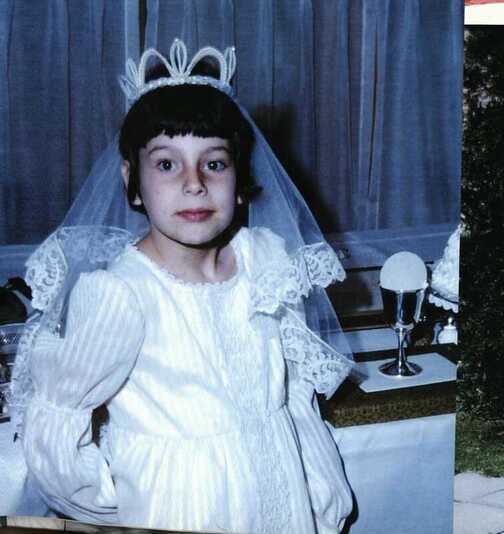 Barbara on her first Holy Communion. 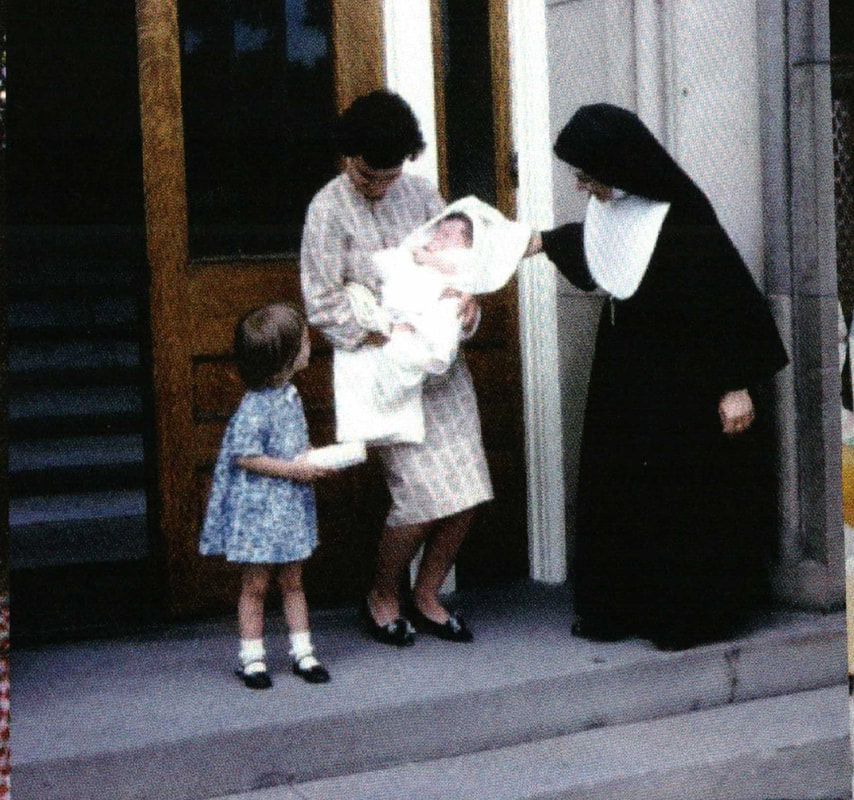 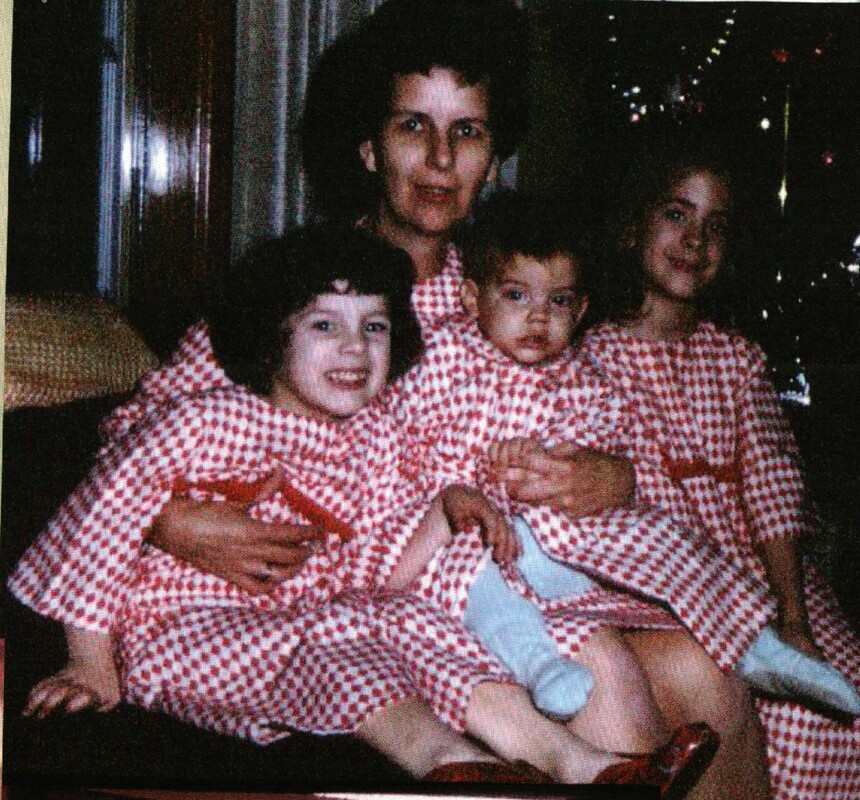 Theresa with her children Barbara, Christopher, and Susan. 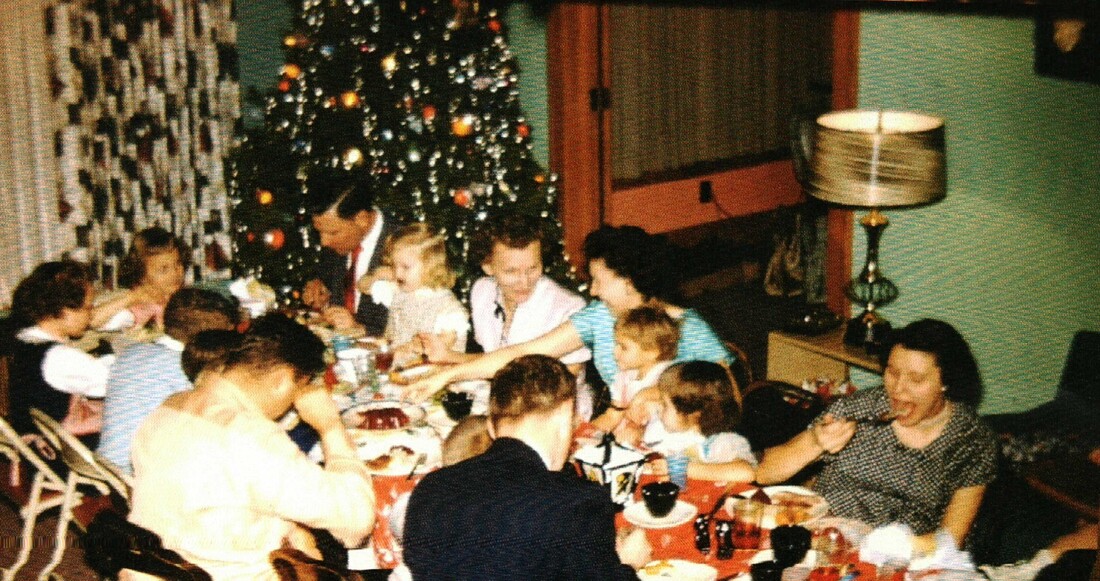 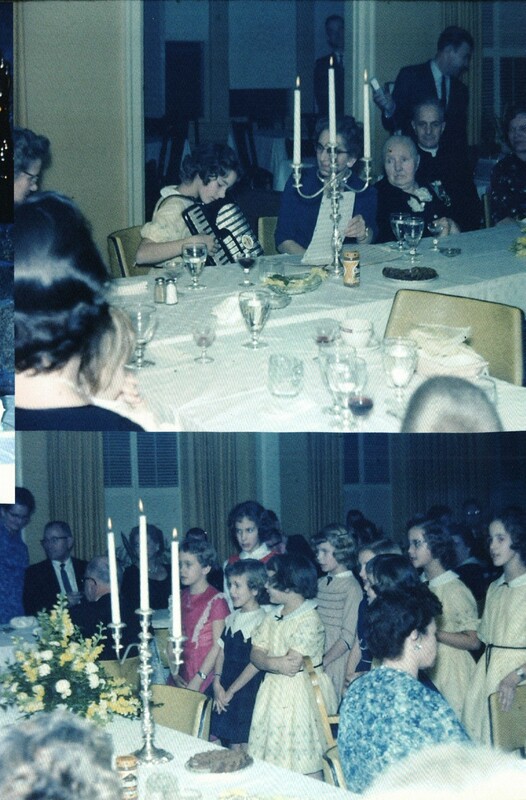 Celebrating grandmother's birthday.
***** UPDATE *****
Carl Klan passed away  September 7, 2020, at the age of 91
Obituary
​Carl F. Klan, age 91, of Erie, passed away Monday, September 7, 2020 at Sarah A.  Reed Retirement Center.  He was born in Erie on October 27, 1928 to the late Anthony and Helen (Rybinski) Klan.
Carl was a lifetime member of St. Stanislaus Church and it’s Holy Name Society, and Knights of Columbus in the Third Degree.  He enjoyed artwork, woodworking, gardening, designing and decorating with his wife, and spending time with his family.  Carl also enjoyed singing with the St. Stanislaus Church Choir and the Moniuszko Singing Society.  He also served in the US Army during the Korean Conflict and retired from Dispatch Printing.
In addition to his parents, Carl is preceded in death by his sisters Mary Klan, Helen Klan, Ann Matuszak, Cecelia Klan, and Hedwig Garr, brother Joseph Klan, and many brothers and sisters-in-law.
Carl is survived by his wife, Theresa (Przybyszewski) Klan, son Christopher Klan (Cheryl) of Erie, daughters Susan Zuck (Richard) of Lake City, Barbara Selker (Keith Mackowski) of Erie, grandchildren Melissa, Katie, Emily, Zachary, Philip, Evan, Ryan, Randy, Renee, and Brandon, great grandchildren Tyler, Kemper, Brodie, Leo, Nathan, and Logan, his sister-in-law Mary C. Klan of Louisville, KY, and many nieces and nephews.
Theresa (Przybyszewski) Klan, joined him in heaven October 3, 2022
Obituary
Theresa D. (Przybyszewski) Klan, 94, of Erie, passed away on October 3, 2022 at Sarah Reed Senior Living. She was born in Erie, Pa on August 1, 1928, daughter of the late Stanley and Anna (Rydzewski) Przybyszewski. In addition to her parents, she was preceded in death by her husband, Carl Francis Klan in 2020 and her siblings, Bernard Przybyszewski, Florence Kubeja, Otilia Schuler, Irene Groszkiewicz and Infant brother Georgie and several sister and brothers-in-law.

TRIBUTE TO THERESA KLAN
I joined St. Stanislaus Church in Erie, when our St. Hedwig’s Church merged with them in 2017.
Before long, it was Lent, and St. Stan’s was having their Friday Fish and Pierogi dinners.  Since I was new to the Parish, I was not yet volunteering.  I was told by someone that a woman named Theresa Klan had created a list of all the businesses that were once in the neighborhood of St. Stanislaus, and they had put it on display at the craft table that she worked at.
Since I am a historian and researcher and have been doing the Erie Polonia History Project since 2015,  I wanted a copy of this list.
One Sunday after Gorzkie Żale, I asked our Pastor at the time, Fr. Bernie, if he would introduce me to Theresa Klan.  He called her over and introduced me.  I explained my project and my interest in her list, and I mentioned that my grandfather, Chester Loncki, grew up at St. Stan’s.  She said you mean (pronounced in Polish) “Wounski?”  It was a pronunciation I knew, but very few people use anymore. It turned out that she had gone to grade school with my Aunt Florence (Honey) Loncki Grygier and remembered my grandfather which was rare!
We became fast friends!
I would see her when I attended daily Mass, followed by breakfast at the East 12th  Street Tim Horton’s, where we sat with the Oldenski’s and she had a table close to us.
At this time, she was also taking care of her husband, Carl, who suffered from dementia.
I started to volunteer with her at the craft table at the Lenten Fish and Pierogi dinners.  Mrs. Klan was the most creative person I ever knew. She could make anything you could think of, from Boo Boo Bunnies to Burp Cloths, to small change purses, to sewn scissor holders, to scrubbies, and Christmas decorations, just to name a few.  She was always looking for some new craft to try.
Then she started finding me things for my project.  Mrs. Klan gave me an old Polish First Communion Prayer Book someone had given her, which started my collection! I asked her if I could interview her on her recollections of growing up.  At first she said, you don’t want to interview me, because my parents didn’t come from Poland, my grandparents did.  I told her that was fine, because I was looking for people growing up Polish-American.
We finally met at her apartment where she proceeded to tell me the stories you see below.  After the interview, Mrs. Klan said, now it’s time for coffee!  My mom and I were served strawberry ice cream on top of cake!  It was so unexpected, and if you know me I love my coffee and sweets.  It was such a nice visit, and she said, come back anytime!
We did visit sometime after Christmas, and she had my mother and I pick out two ornaments she had made.  We hang them on our tree every year.
One Parish Day I had lost my voice, and I couldn’t give Church Tours, so I volunteered with Mrs. Klan at the craft table.  We couldn’t have had a more enjoyable time, chatting in Polish, her making sure I ate, her pointing out people I should pass on my information sheets to.
I recall one time we were discussing Politics, and she mentioned her favorite President was Harry Truman, because he was like a grandfather. It’s just something you don’t hear every day.
It was shortly before the pandemic started, that Mrs. Klan became my partner on the Prayer Line. She would never just answer the phone with a Hello, it was a cheery Good Afternoon! Or Good Evening!
No matter what the day held , good or bad, she always tried to look on the positive side.  She loved to play Triominoes and of course, Bingo, which she always seemed to manage to win.  Sometimes I would call her and she would happily say, “Not now, Bobby, I’m playing Bingo! We’ll talk later.”
It was also during the Pandemic, that her husband Carl died, and she was very sad that many could not attend the funeral because of Covid.
Mrs. Klan pulled herself together and kept going, even though she was starting to have breathing issues.
We would always talk Polish to each other, the few words that I did know, and we would try to quiz each other on what meant what.  One word she taught me was the word for “Pineapple.” (“Ananas.”) Because her brother like some kind of story about pineapples in his school reader.
Even when she could no longer take down the prayer requests, I still tried to call her once a week, and we would pray the Hail Mary, and she would ask about my family, and she hoped to see me soon.
We would always end with Ja Cię Kocham and Dobranoc or Idz Z Bogiem, which means I love you, Goodnight! Or Go with God!
Theresa Klan loved her Catholic Faith, especially the Blessed Mother, Saint Jude and Saint Therese,  her Polish Heritage, and of course her husband, loving children, grandchildren and great-grandchildren.
She was more than just a friend, she was like another grandmother to me! Writing all this has been very emotional. But I know that she is in a better place with her beloved husband Carl!
Ja Cię Kocham Mrs. Klan! Spoczywaj w pokoju. (Rest in Peace.)
-Bobby J. Sulecki