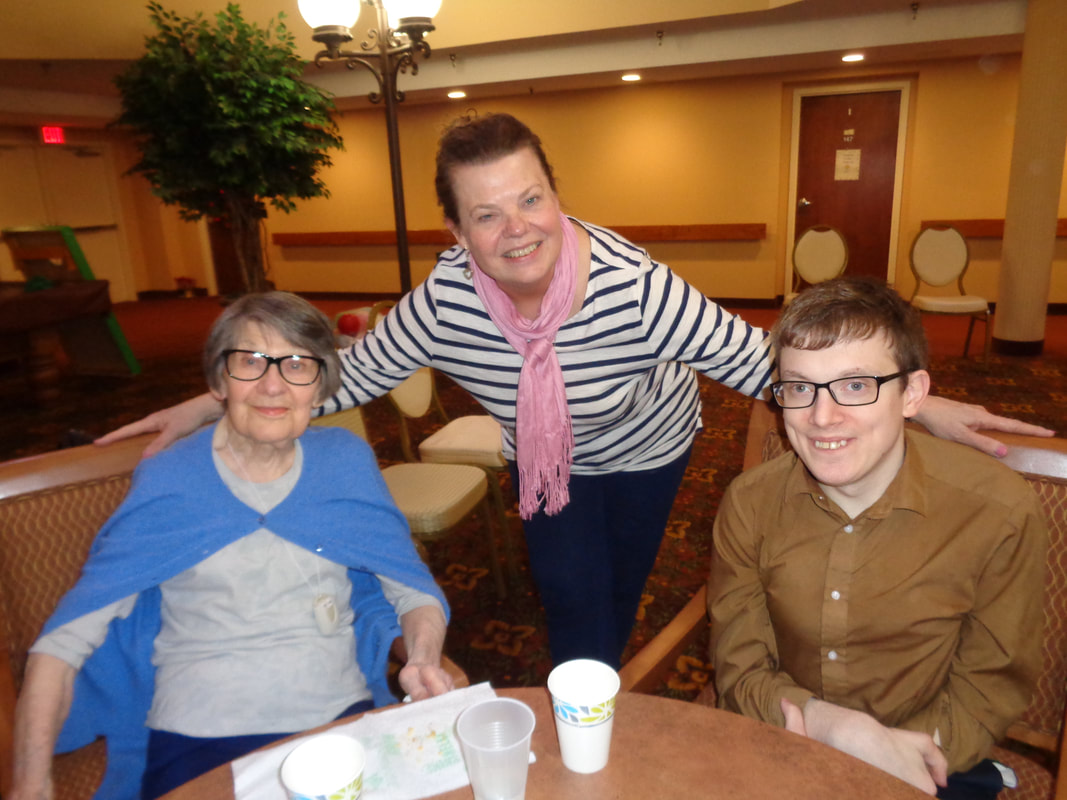 Interviewing Dolores Najechalski Osiecki on December 28, 2018 at her residence at Regency at South Shore. With daughter Emily Osiecki Zielinski
Dolores Najechalski Osiecki was born on February 23, 1927, to Stanley Najechalski and Bessie Jobczynski Najechalski. She was born on East Lake Road, next to the Melody Bar, but she grew up on Payne Avenue.   She had three sisters, Josephine, Florence, and Genevieve who died of a burst appendix at the age of 4.  Dolores and her sisters were known as “Jo, Flo, and Do!”
​Her father was born in Poland and her mother was raised on a farm in McKean.   Mrs. Osiecki’s parents did not share much about life in Poland because they were Americans now!  Her father came over just in time to get drafted for World War 1; and they were married in 1923 at St. Stanislaus Church.

Dolores was raised at St. Casimir Church and School.  When I asked what she remembered about the first priests at the church, she said that she remembered Fr. John Dembinski being killed in a car accident and that her mother and grandmother went to the funeral.  Msgr. Dlugolecki was very sweet and loveable.  He died giving out communion.

Dolores enjoyed school at St. Casimir’s.  The sisters were tough, but they were also good. The classrooms were under the Church.  Sister Alfreda was from Poland and taught 6th grade. She taught Dolores notes on the piano and claimed to be a personal friend of Ignacy Paderewski.  Sr. Martina, who taught 8th grade, was a good teacher but kind of strict.  Dolores said the nuns humiliated you, no one knew about self-esteem back then.

The children did little school plays at Christmas, and the Sisters taught little dances.  The older children put on dramas.

St. Casimir’s organist when Dolores was younger was Francelia Daub.  Dolores told us Francelia was so dedicated, she walked from her home in the St. John’s area.  She cried when she played because she had cancer, and died the same month as President Franklin D. Roosevelt.

Some of the businesses in Dolores’ neighborhood were The Melody Bar, Hess Avenue Bakery, and Bujalski’s Cafe, all owned by the Bujalski family at that time.

One of her best friends was Esther Klugiewicz.  Esther’s older sister, Aurelia, told them there was no Santa Claus, so they were terribly upset, and had it out with her!  Aurelia was also a great pianist.

Other neighbors were the Tarkowski’s, Mr. and Mrs. Carl Kalinowski (he was a detective,) and a Swedish girl whose father was a career man in the Army. They had all kinds of games to play with at this girl’s house and she was lucky enough to have a swing set!

They had a neighborhood Theater, called “The Avenue.”
Dolores’ grandparents, the Jobyczynski’s, had a store on Payne Avenue.

She and her sisters were part of the Eastcapades of 1942. They had a little group with their friend Marian and sang War Songs and harmonized, such as “Three Little Sisters,” and “Praise the Lord, and Pass the Ammunition.” Two of the girls wore navy blue skirts and the other two wore brown skirts.  Two had gold sweaters and 2 had cardigans (worn backward, so they could match the sweaters!)

Dolores Najechalski met her husband Casimir (Cas) Osiecki at the 19th Street Falcons. He was from Holy Trinity. She said Cas appreciated the finer things in life.  He also took art classes from Joe Plavcan.

They married on July 22, 1950.  They were married for 1½ years when he was drafted during the Korean War; however, he ended up in Germany.

Dolores and her husband first lived on East 2nd Street, then on 19th and Reed, East 7th with her mother, and built their home in 1962 in Lake Cliff in Lawrence Park.  They had three children: Emily, Mark, and Camille.
Their daughter Emily shared that her parents’ love of music was all pervasive during her childhood.  They loved the Big Bands, Polka Bands, Classical and Opera.  In fact, Dolores sang in choirs for most of her life, and when she was well into her 80’s, she was part of a chorus for the Erie Philharmonic’s performance of Beethoven’s 9th Symphony.  Always active, she even took up tap dancing later in life.

Dolores worked for the Erie School District; Public School #13 on 10th and Ash Streets.  She was the secretary for the school office.
After her children went to school, she became the secretary to the Head Librarian at the Erie Public Library on Perry Square.
Later she was secretary to Michele Ridge for two years and was honored to be invited to Governor Tom Ridge’s Inaugural.

Dolores’ husband, Cas, had worked at the Hammermill Paper Company in Industrial/Labor Relations for 44 years, retiring in 1990. Casimir Francis Osiecki, passed away on Friday, March 27, 2009 at the age of 81.

I always ask if family had any Polish sayings superstitions growing up. Dolores told me these... “Old age is not a joy,” “Don’t look at your hands,” and “Don’t put your shoes on the table, because someone will die!”

It was a pleasure to interview Dolores Osiecki and share her memories. 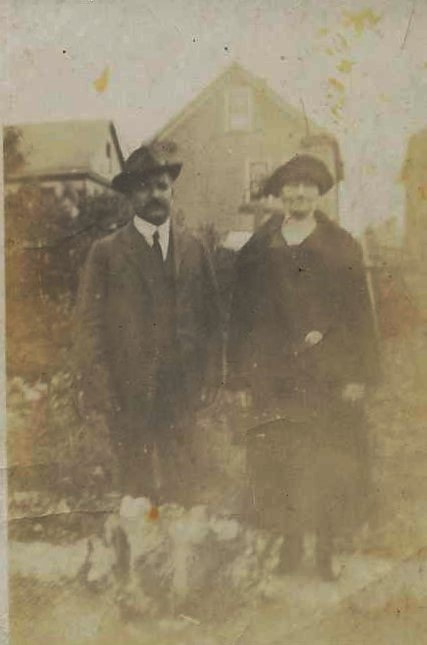 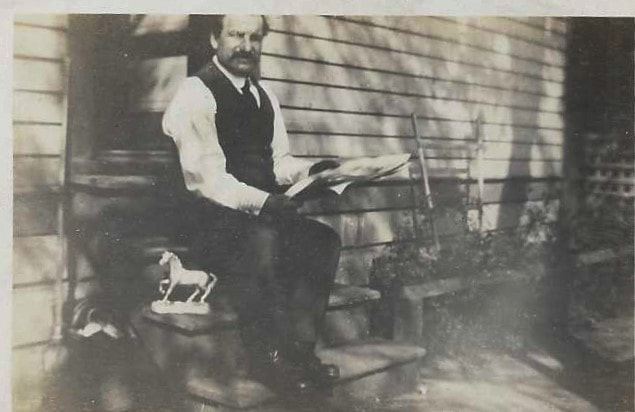 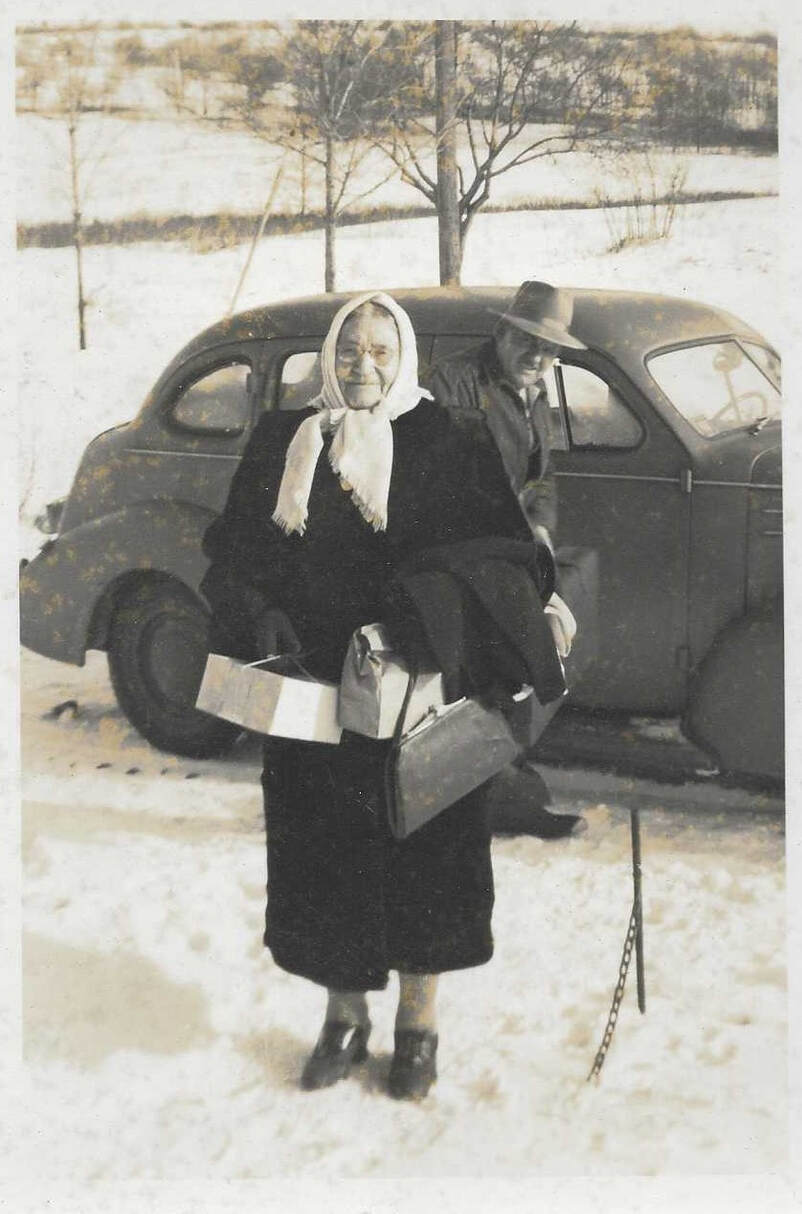 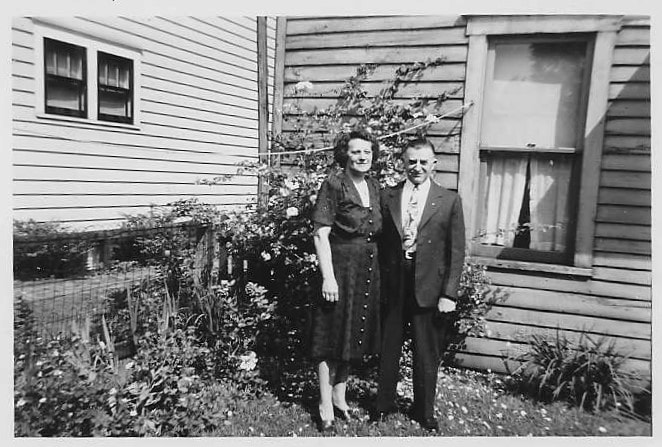 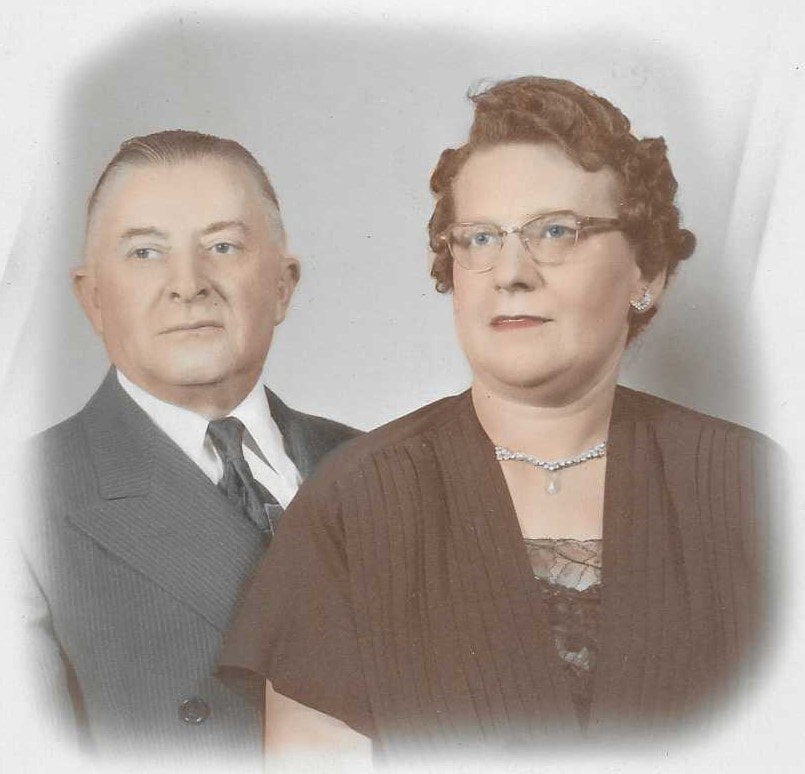 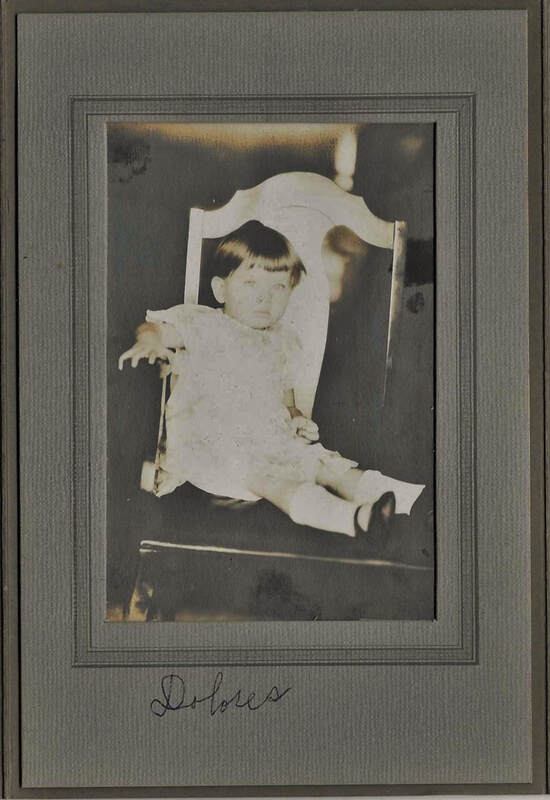 Dolores Najechalski as a baby 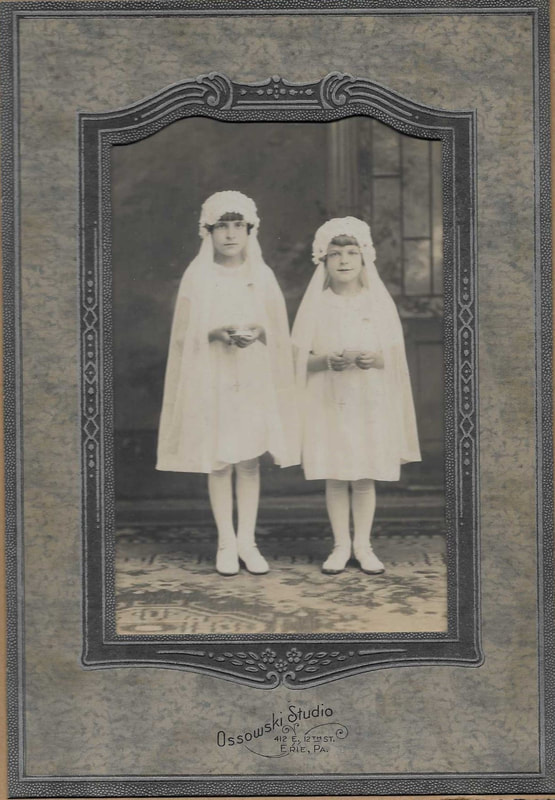 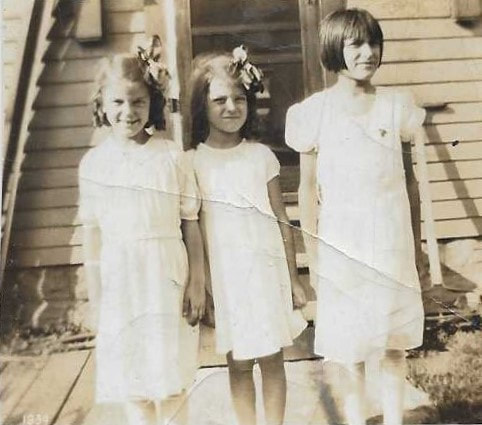 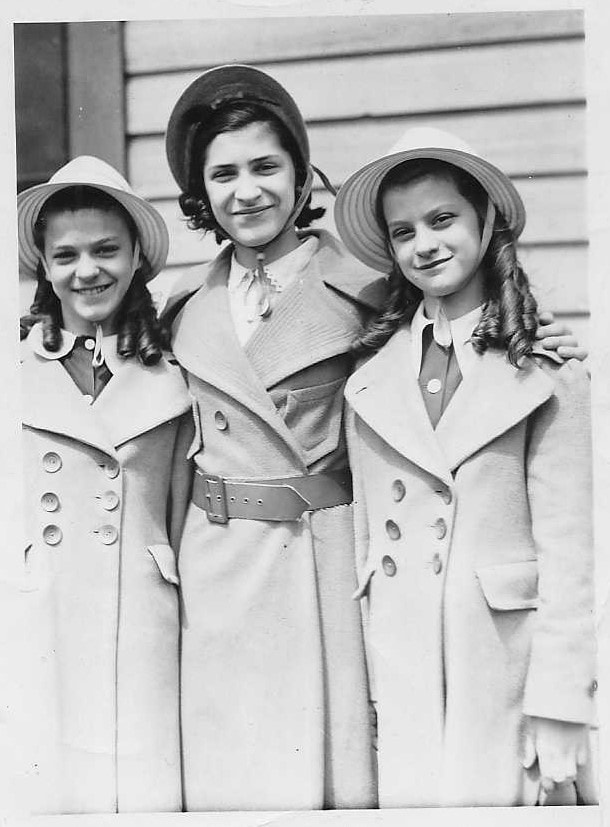 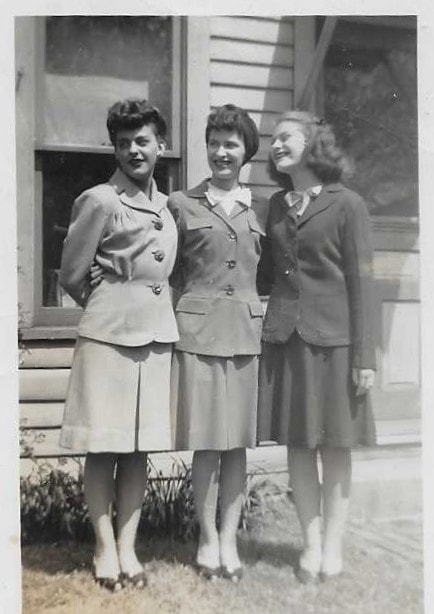 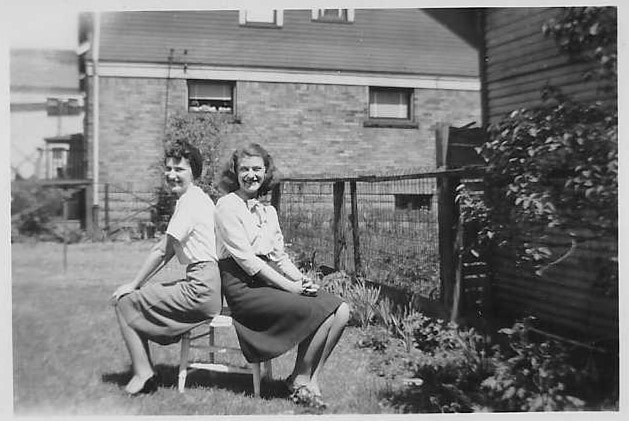 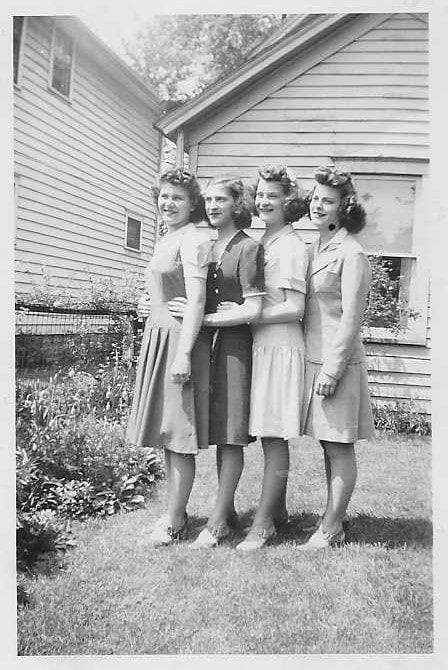 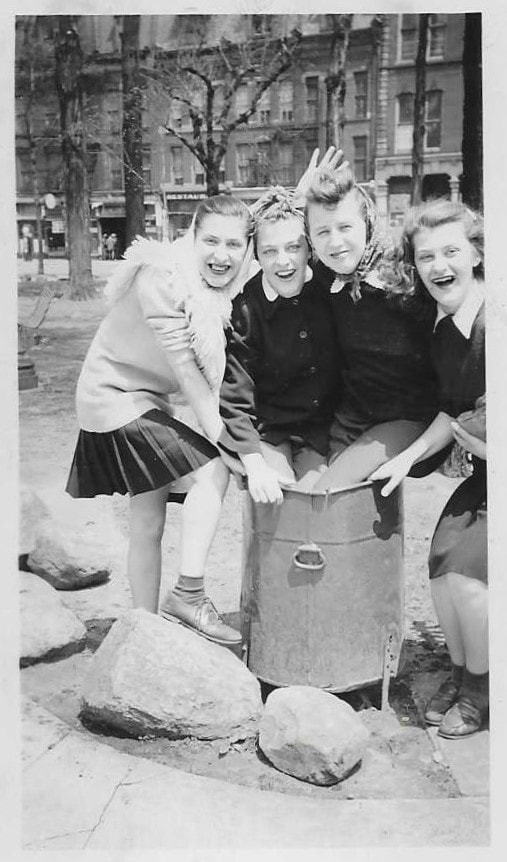 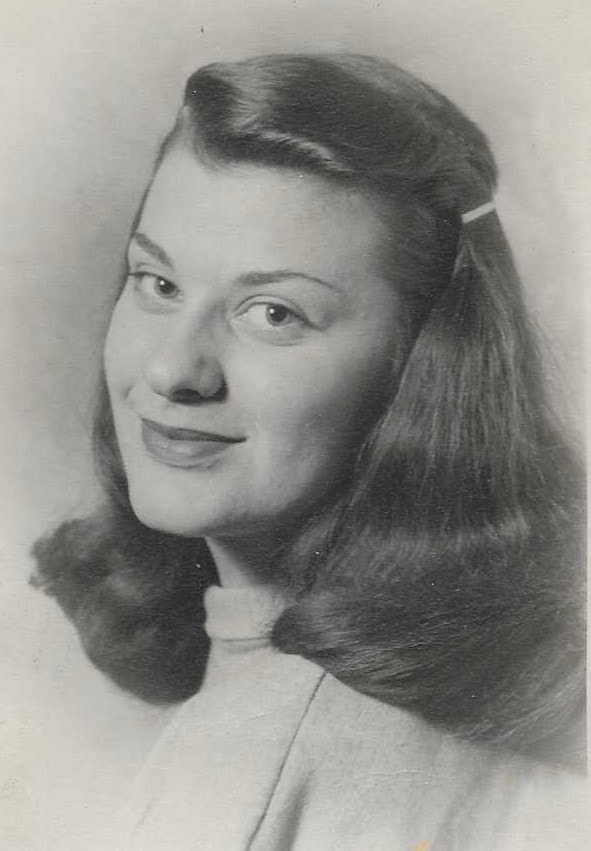 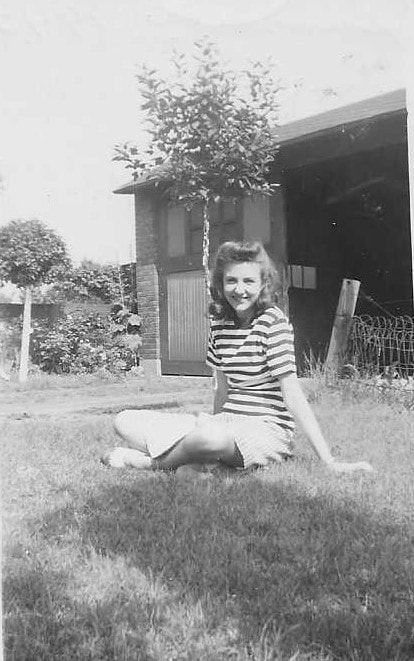 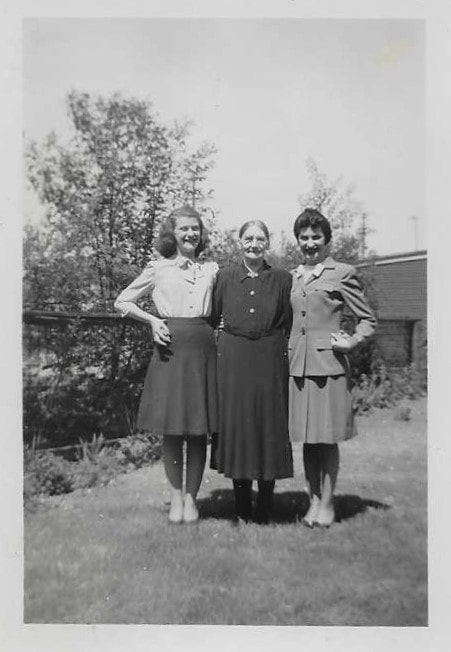 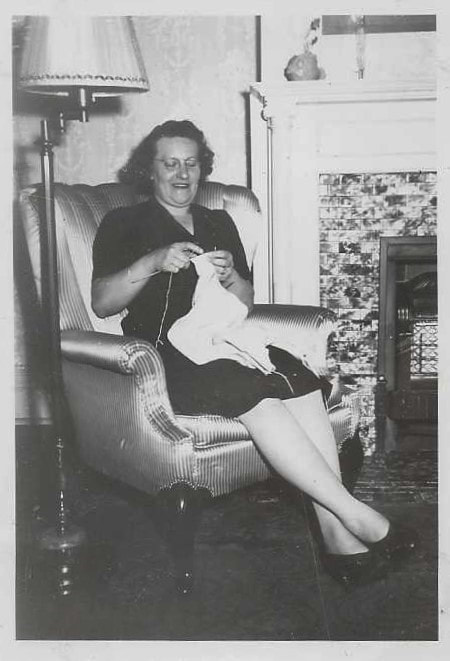 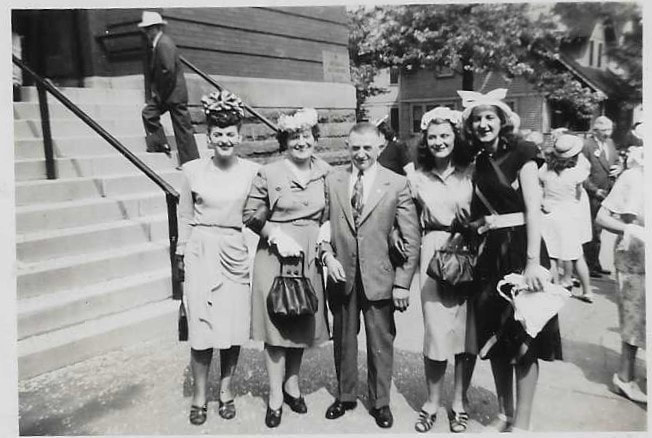 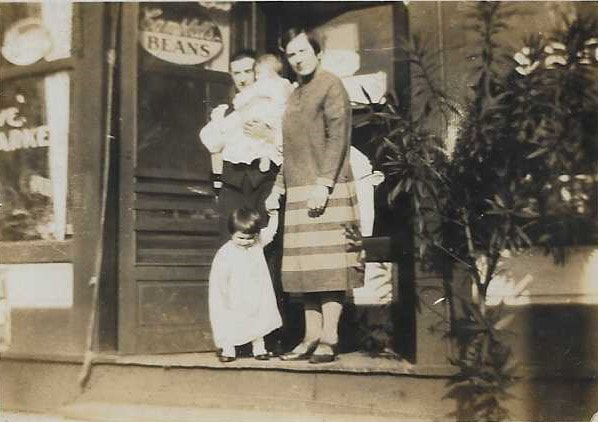 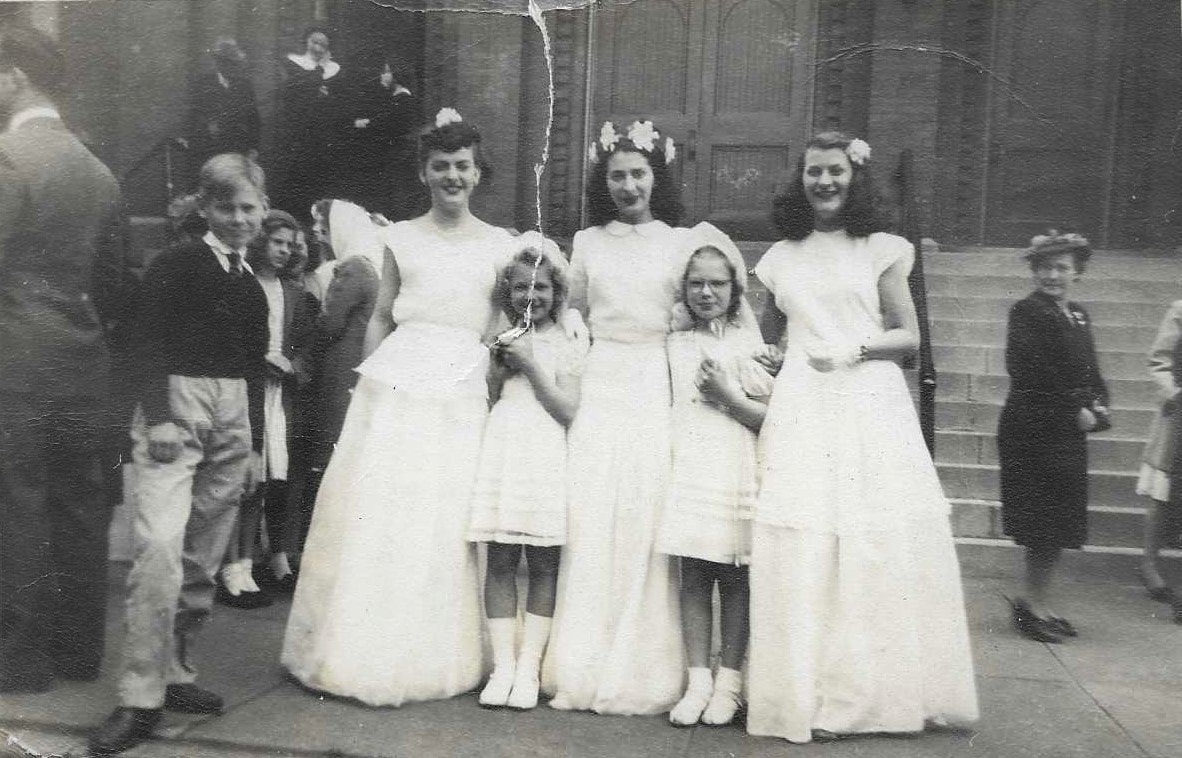 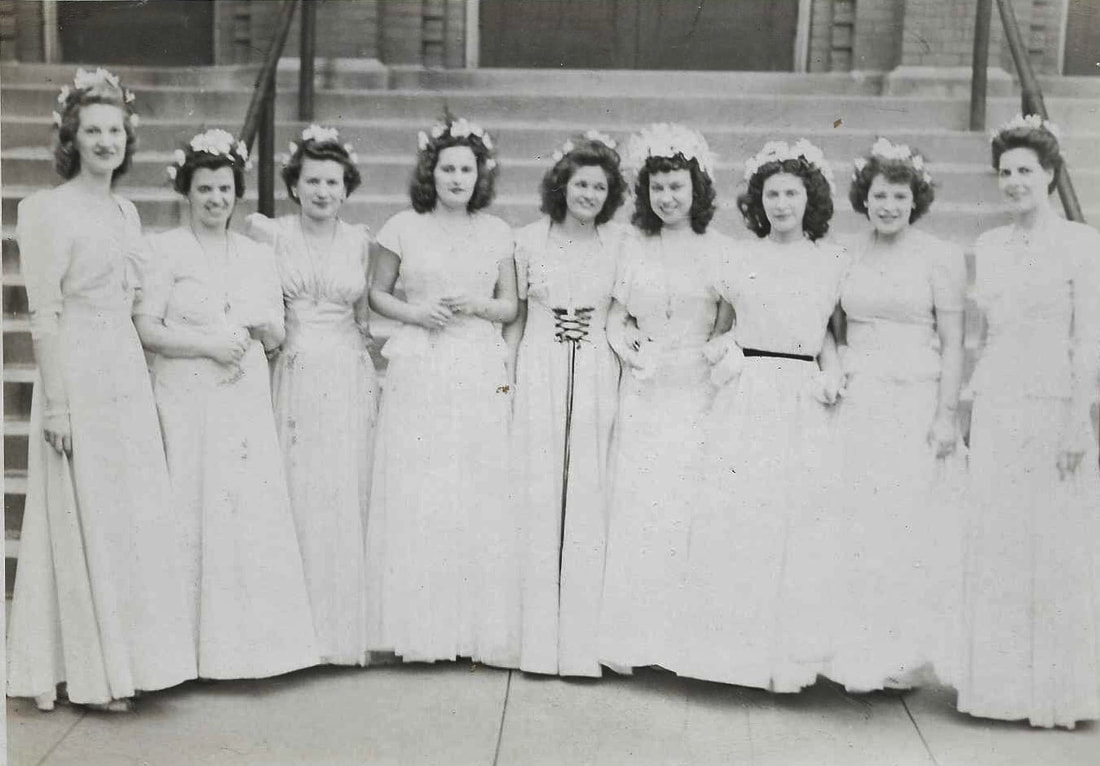 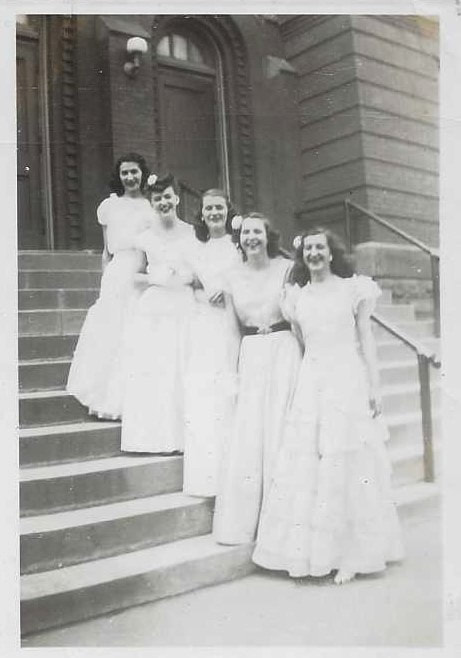 Jo, Flo, Do, with Rita and Evelyn Krainski. 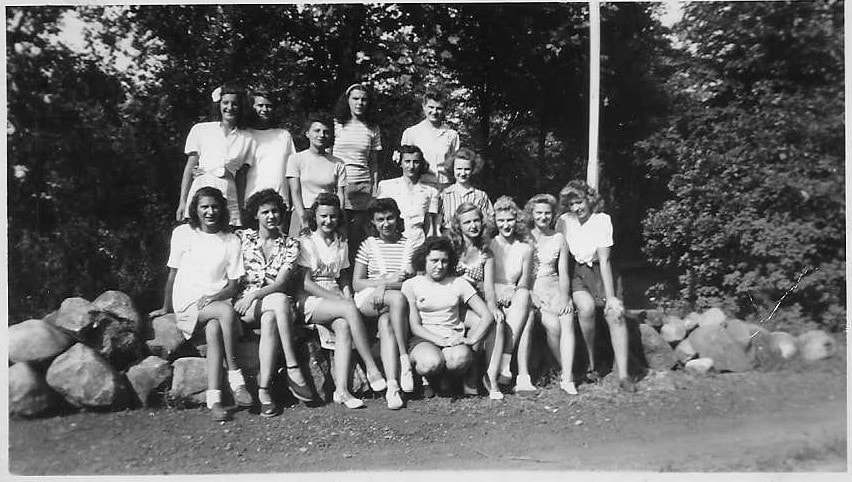 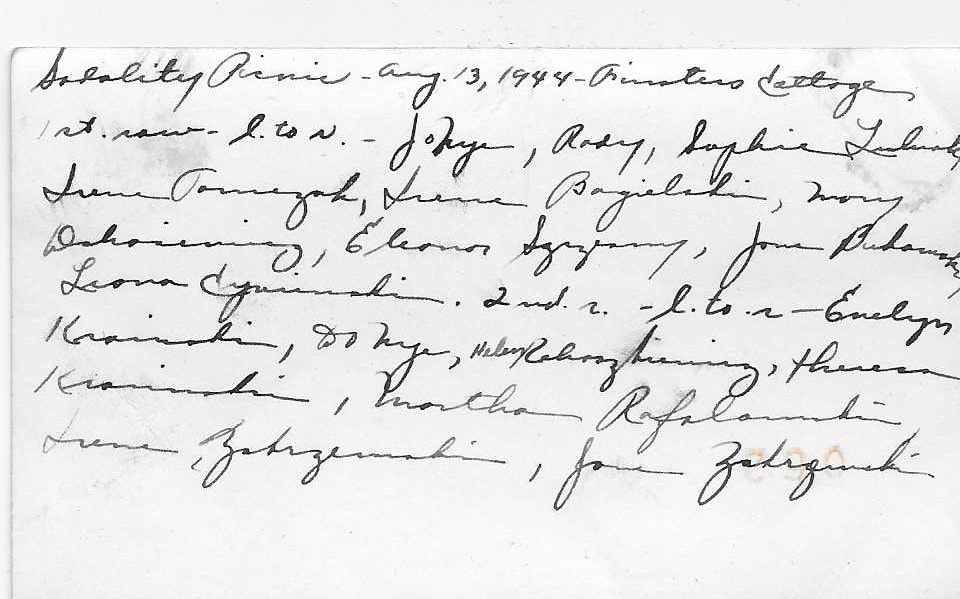 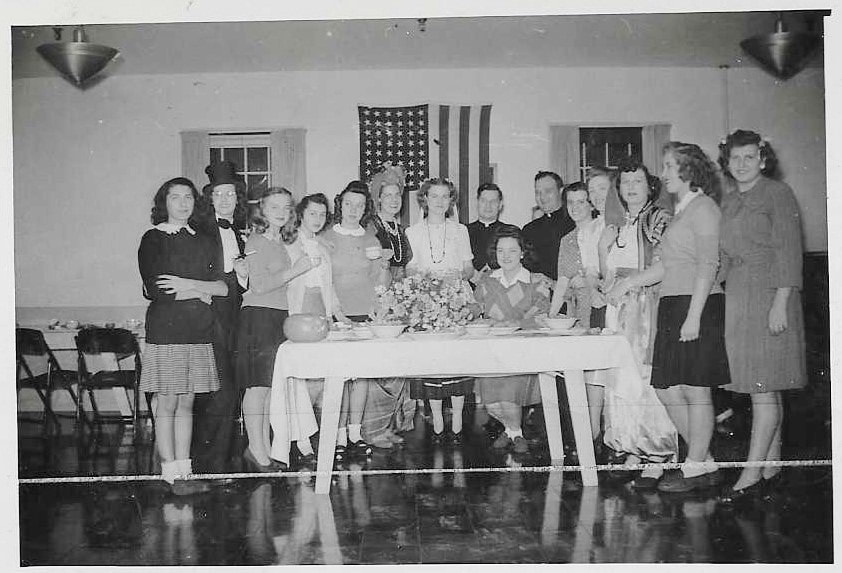 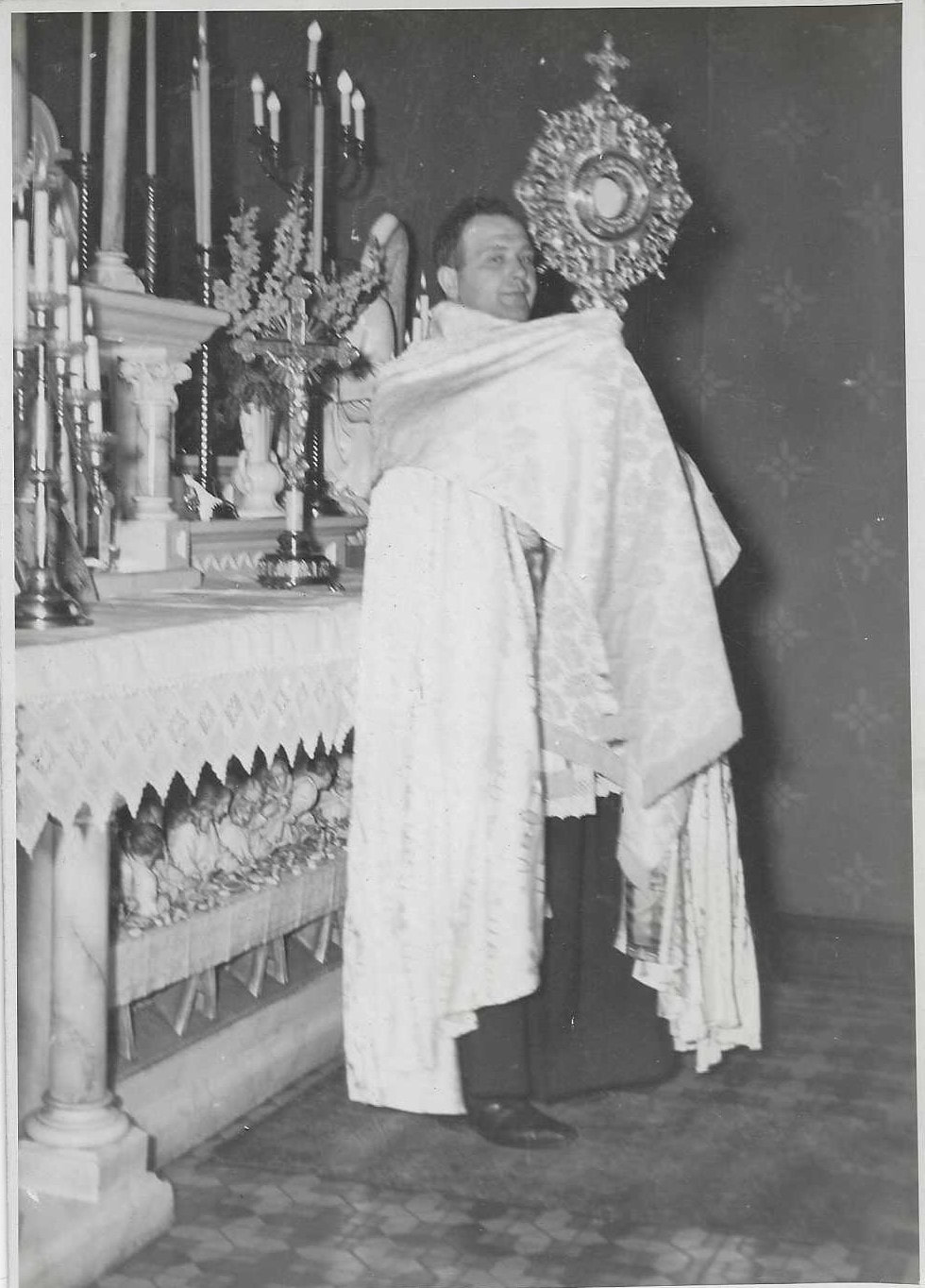 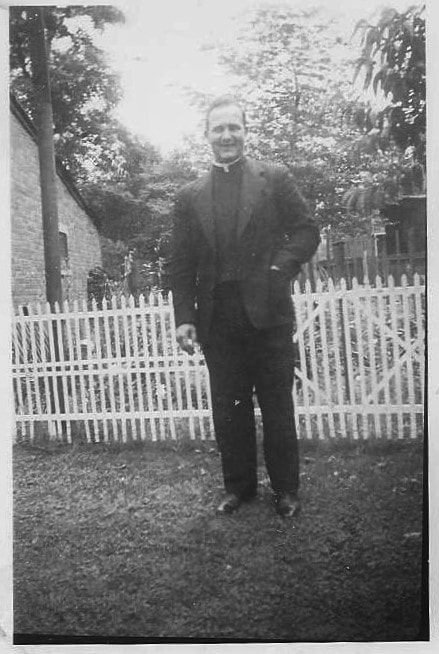 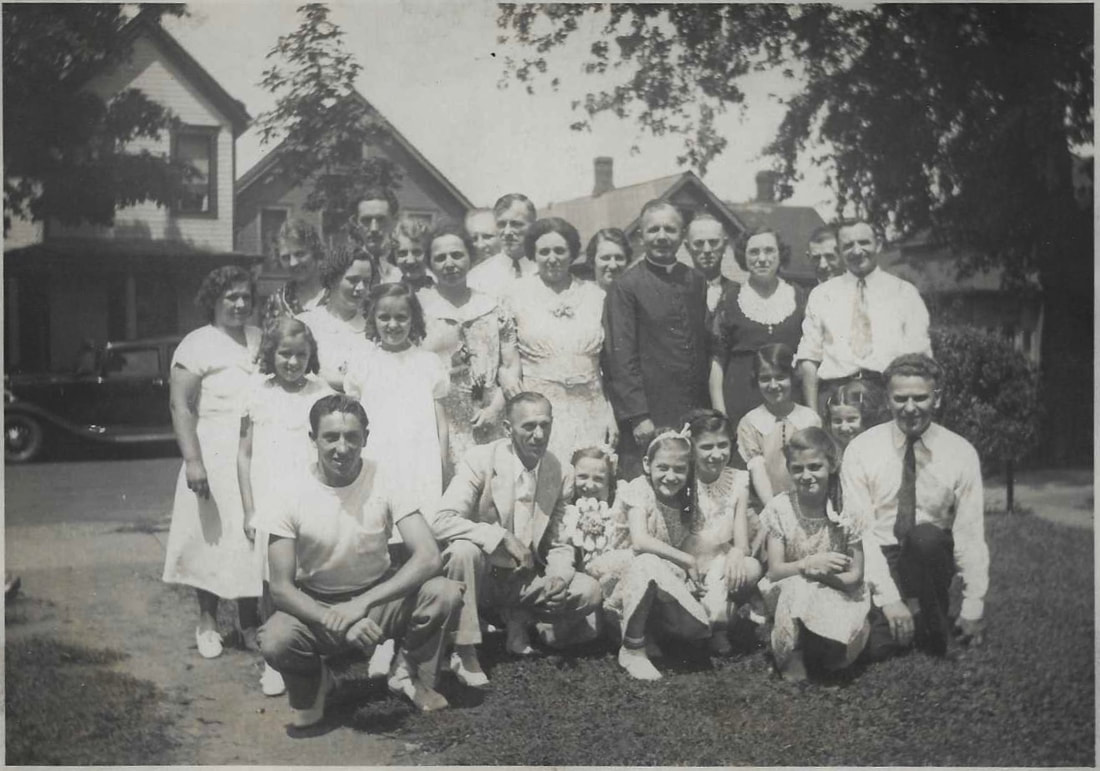