“I was never taken up in the trappings of being a Priest, a cleric, a clergyperson…” reflected Msgr. Bernard J. Urbaniak, better known as “Fr. Bernie,” as I sat down recently with him at the Rectory Office of St. Stanislaus Parish where he had been first administrator and now Pastor for nearly 29 years.

In those 29 years he has seen many things come and go and many changes.  From saving the Parish and School from closure when he first came, to the merging of two other Parishes into St. Stanislaus and the partnering with Holy Trinity Parish.  Through it all, Fr. Bernie has persevered.  A proud native son of St. Stanislaus, on May 18, 2018, he will mark 50 years as a Priest in the Diocese of Erie. He is only the fourth Pastor in the Parishes’ 134 year history.

That weekend he will have 2 masses to commemorate the occasion. One at Holy Trinity and one at St. Stanislaus, since he is Pastor of both. On Sunday, a reception will be held in his honor at The Concourse at Union Station. 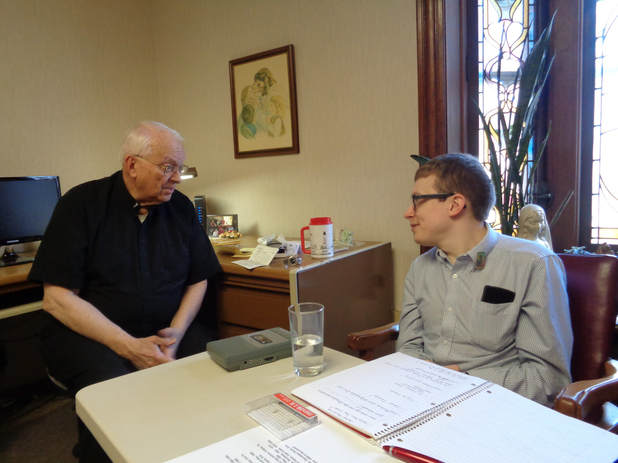 Fr. Bernie and myself (Bobby J. Sulecki) during our interview. 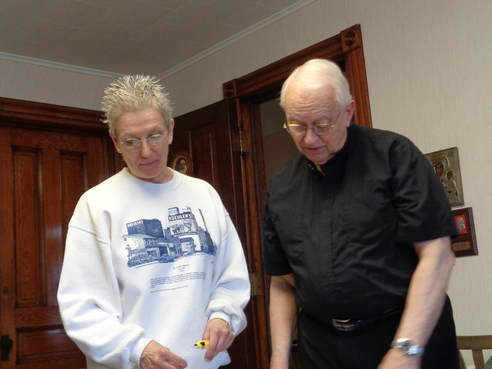 St. Stan’s Secretary Debbie Oldenski and Fr. Bernie planning the next church bulletin.
Fr. Bernie was born on July 19, 1942 and grew up at 342 East 13th Street.  He is the second oldest of four children (Jim, Bernie, Al and daughter Chris) born to Bernard and Louise Wasielewski Urbaniak.

His mom and dad opened a little corner store around 28th and German, then started selling fresh meats and “they fell into that business.”  They rented space at the 12th Street Market after son Jim was born and his father then went into business with his brothers and became the famous Urbaniak Bros. Meat Market, still in business today.

At St. Stan’s School Fr. Bernie shared he was a good and serious student, whose favorite subjects were Science, Art, and History. His favorite teacher was in 8th grade, Sr. Mary Ascension who was very involved, knew her students, and was fair and respected.

He thought he would like to be an Altar Boy in 3rd or 4th Grade and told his mother.  However, he had to learn all the Latin Prayers for Mass.  The nuns would teach him and he would practice over and over with his mother.   He just could not get them right.  He kept trying.  Then it was time to serve his first Mass with Msgr. Stanczak.  He was all dressed up and ready to go, but nervous.  At that time, there were six altar boys. The first word was, “Confeitor!” Something wasn’t lit right, so Msgr. Stanczak sent the two oldest boys to fix it; then something else wasn’t right so he sent the next oldest boys to fix that.  So, he was left with the other neophyte.  They were bent all over with their heads touching the step, to be humble for their sins.  When it was time for them to respond, Fr. Bernie couldn’t think of a word! He just tried mumbling.  After that, he thought, “I don’t want to do this, why should I do this? I don’t even know what I’m saying! One Mass.  That was my story as an Altar Server; and here I am now, back in my Parish for 29 years and 50 years as a Priest.”
​
Fr. Bernie attended Cathedral Prep and in his freshman year won 1st Place at the Science Fair for his model of the U.S. Vanguard Satellite.  He had a great interest in Science and Chemistry and thought about being a Pharmacist.  In his senior year, the students put on a talent show.  Fr. Bernie decided to do an impression of Victor Borge on the piano! 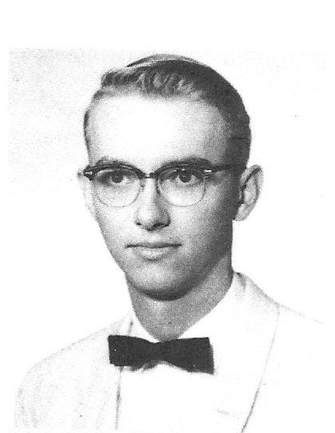 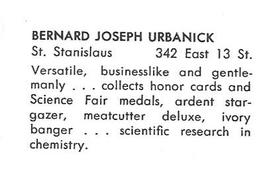 Cathedral Prep Senior picture. Last name misspelled.
However, towards the end of High School, he felt a different calling. Although he had no Priest’s influence, and never felt close to any Priest, he felt a religious calling to God and other people.  His parents were religious people, taught honesty and Christian values and that was very important in their lives.
So, Fr. Bernie came home from school one day and his mom was ironing clothes, and he told her he needed to talk to her.
He said I am thinking of studying for the Priesthood.  His mom said, “You know something, people were asking me when you were going to make your mind up to do that.”  And so it just happened that way.
He attended St. Mark Seminary/Gannon College (now University) from 1960-1962; Christ the King Seminary/St. Bonaventure University from 1962-1964 and Theological College/Catholic University in Washington D.C. from l964-1968.
Fr. Bernie was ordained on May 18, 1968 at St. Peter’s Cathedral by Bishop John Francis Whealon. 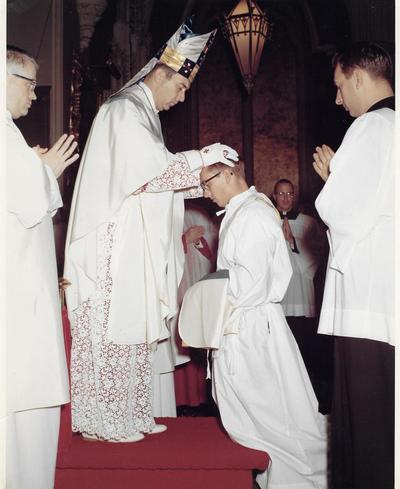 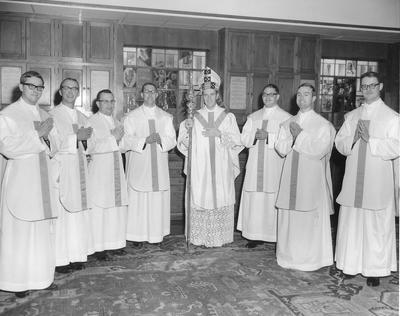 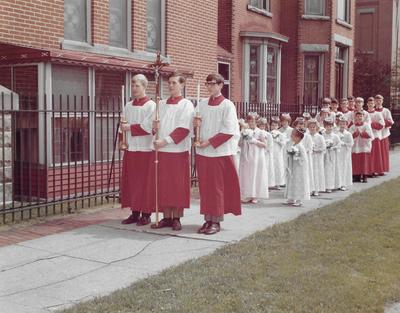 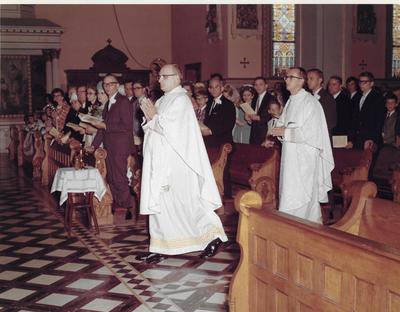 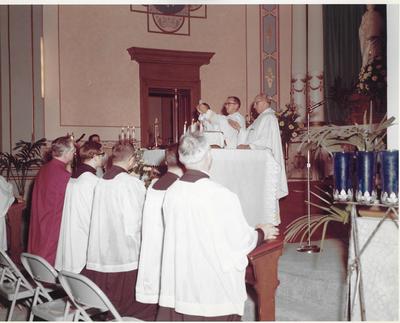 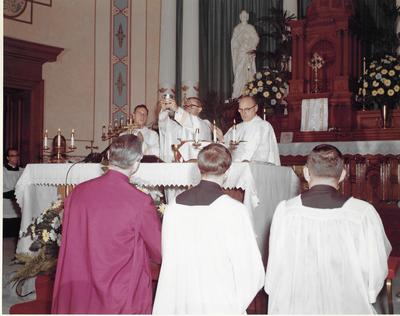 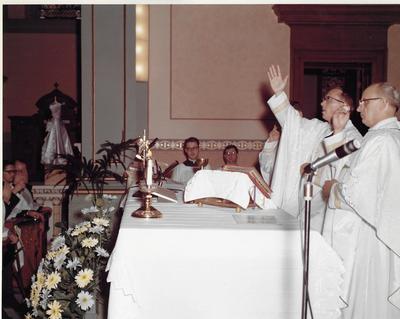 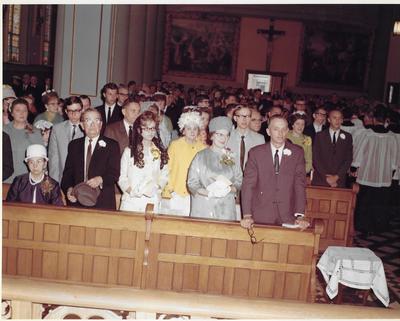 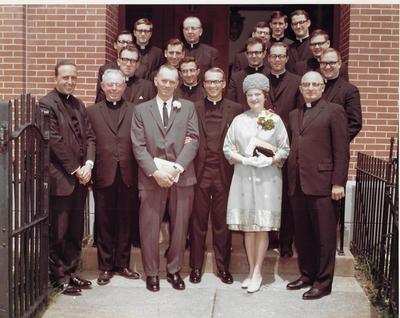 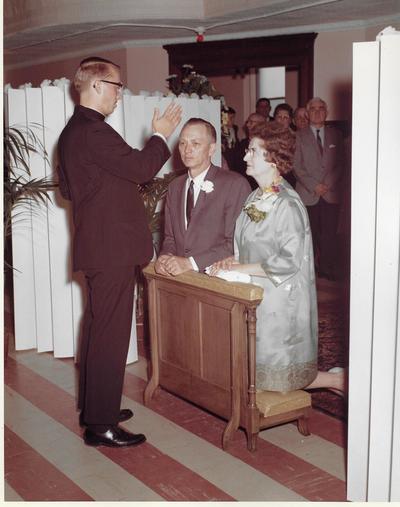 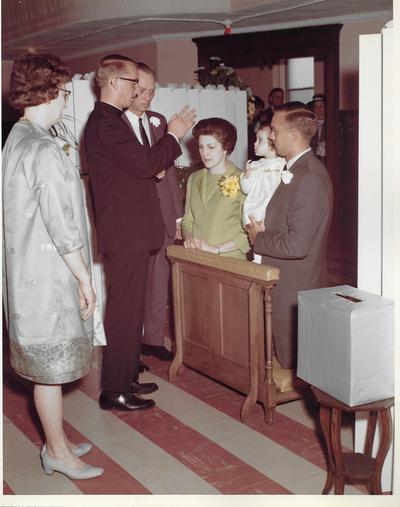 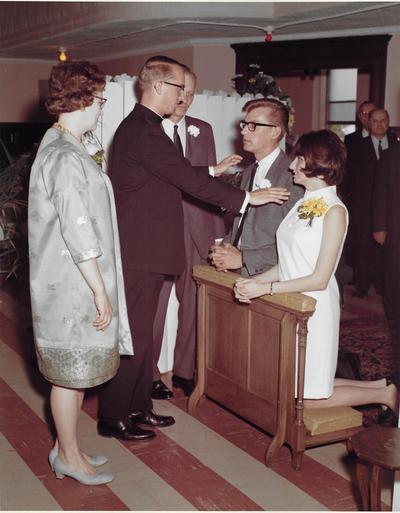 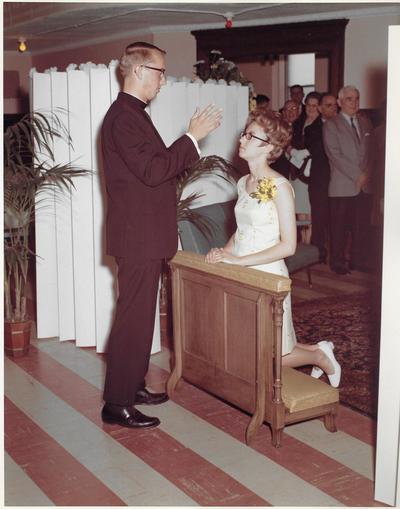 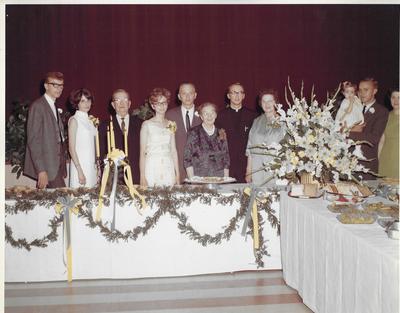 Father looked back on his first year in the Priesthood as a difficult one.  He was assigned to teach at Cathedral Prep and reside at St. George Parish.  He was very disappointed, all he wanted was to be in Parish Ministry. There was no discussion on what he would be teaching all summer.  He didn’t find out until the first day of classes.  He would be teaching Theology, even though he had no degree. 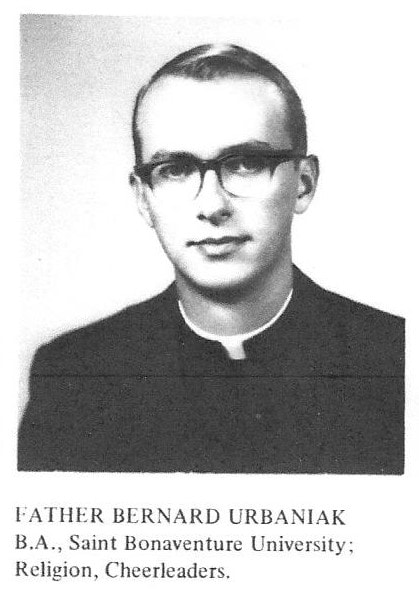 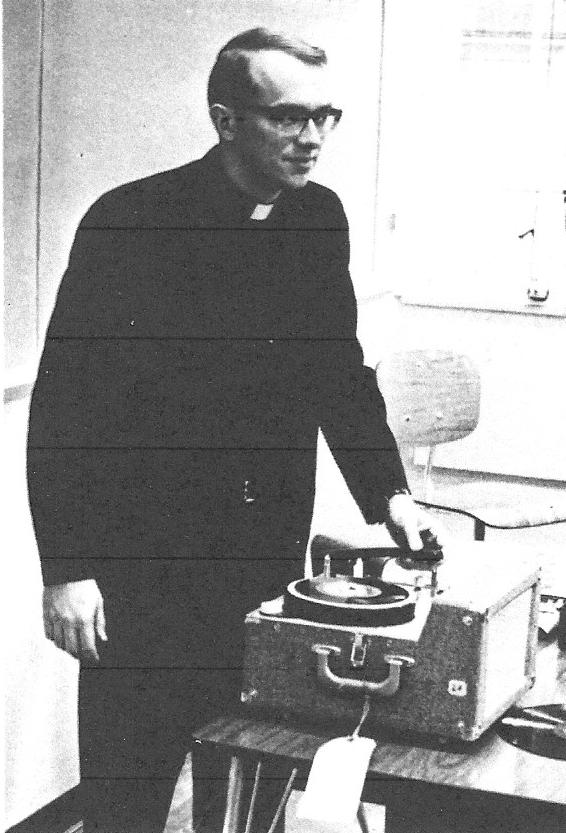 Teaching at Cathedral Prep.
Bishop Watson contacted Fr. Bernie the next year and and said, “We feel you will make a good teacher, but in a smaller school.”
Fr. Bernie  was then appointed to the Faculty of Dubois Central Catholic High School in May 1969; with residence at St. Tobias Church in Brockway from 1969 to 1974.
It was a much better fit; the school was co-ed and smaller; and more family oriented.  He taught Theology and Psychology; coached drama from 1970-1979 and was Diocesan moderator for the Catholic Forensic League; “everything but Athletics.”
He also served as Central Catholic’s assistant headmaster from 1974-1982, and interim headmaster 1982-1983. From 1974 to 1989, he was administrator at St. Bernard Parish, Falls Creek and oversaw the construction of the parish center in the early 1980’s.  He never regretted his years of teaching at Dubois Central Christian High School.

In 1988 Fr. Bernie asked to be relieved of his teaching duties. He thanked God for that opportunity but needed a new challenge. It was at that time that Bishop Murphy and the Diocese did a study regarding the East Side Parishes.  The study recommended to close St. Stanislaus Church and School.

Msgr. Jim Burke who was Vicar General asked to meet with Fr. Bernie.  Was Fr. Bernie aware of what was happening at St. Stan’s?  He said yes, it’s my home Parish.  Msgr. Burke stated that we feel you would be a good fit there as Administrator for the time being.  Fr. Bernie never imagined coming back to his home Parish; and was advised not to talk to anyone but his parents and maybe another Priest; and “we have to know your answer by tomorrow.” Fr. Bernie discussed the situation with his parents who told him, “they wouldn’t have asked you if they thought you couldn’t do the job.”
Fr. Joseph Radziszewski was in the midst of retiring. According to the data of the study, St. Stanislaus Church and buildings were in “very poor physical condition and in need of major renovations and repair. The Convent is no longer suitable as a residence in its present condition. The Club building is being vandalized and is beyond use.  Parish services are minimal.  There are no committees or boards. There is almost no outreach to the community. The Parish did not participate in RENEW.”

When Fr. Bernie arrived in June of 1989, he had a difficult task.  St. Stan’s Parishioners were very upset with the recommendations and there was a lot of confusion.  He had no idea how much money was in the Parish as there were no Pastoral or Finance Councils.  There was no record of Parish registration information.  Fr. Bernie had to make decisions to try to bring everything up to date.

There was some resistance and resentment as to why the people had to re-register and make changes in the Parish.  Fr. Bernie tried to reassure them that it is the way the Church has to run to be viable.  Under his guidance, Father worked with the people to form the necessary committees.  After permission was given to keep the parish open in January 1990, the fundraising and hard work began.
Fr. Bernie was then appointed Pastor and said, “Thanks be to God, we got through all that, but it wasn’t all roses and ice cream.”

In August of 1991, Father Mark Bartchak Ph.D., Judicial Vicar of the Diocese was assigned as a weekend assistant and residence at St. Stanislaus.  Fr. Mark had approached Fr. Bernie about living at St. Stan’s and Fr. Bernie said he would think about it. When Fr. Bernie mentioned it to his mother she said, “You better let him live here, get on that phone right now!”  And so a wonderful friendship and working relationship occurred until 2011 when Msgr. Bartchak was named Bishop of the Altoona-Johnstown Diocese. It was an honor for the Parish. 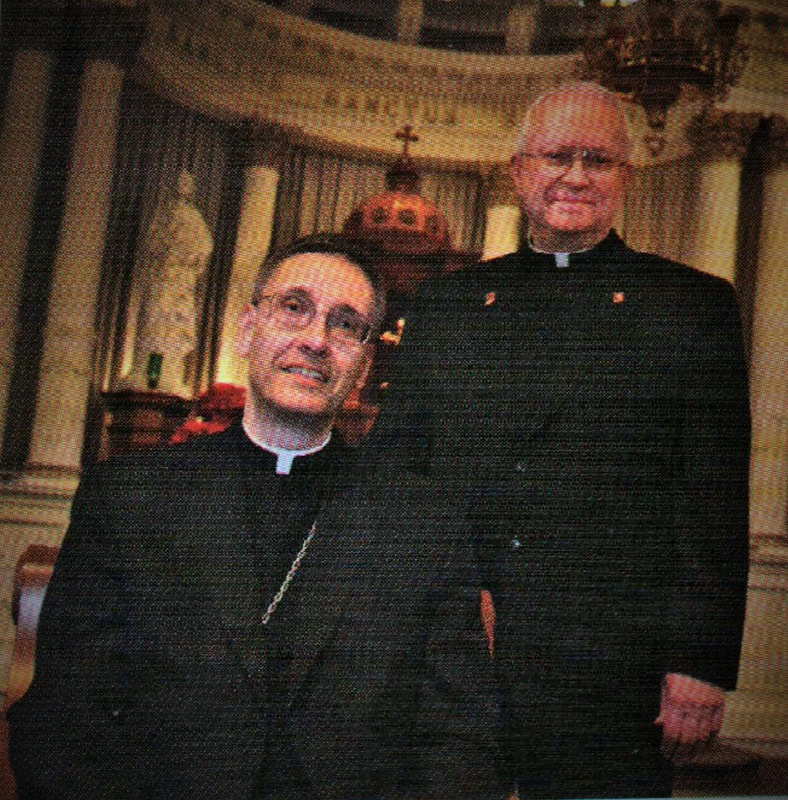 Msgr. Urbaniak with Msgr. Mark Bartchak, now the Bishop of the Altoona-Johnstown Diocese. 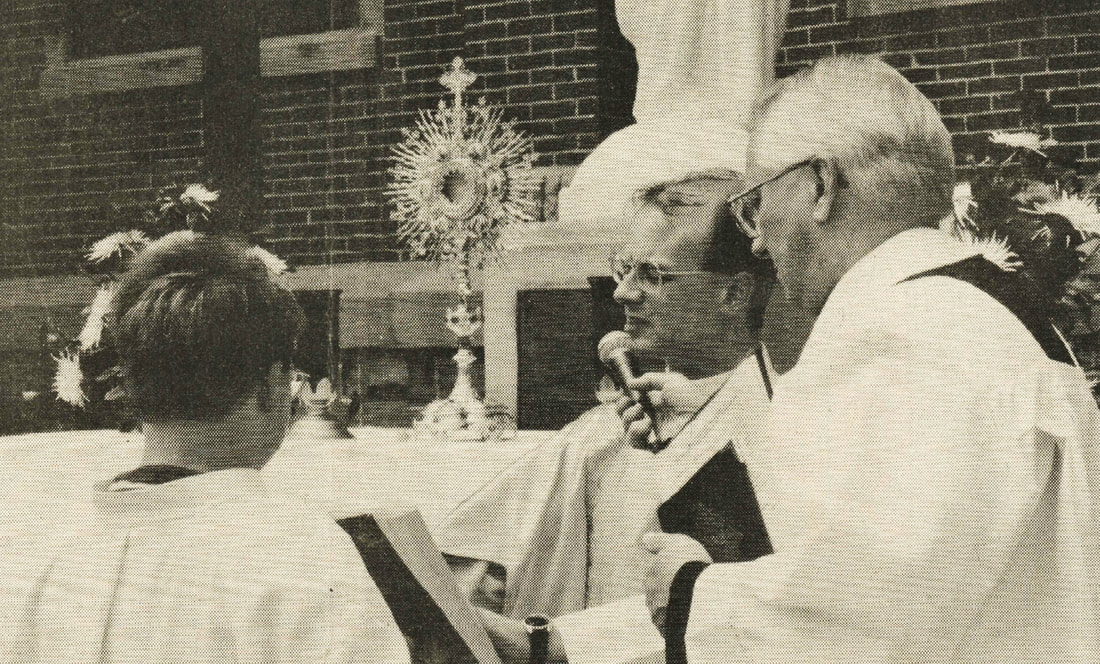 From original caption: The Rev. Mr. Joseph Reigel, center, a transitional deacon serving Erie’s St. Peter Cathedral Parish, reads the Gospel during the annual Corpus Christi procession at St. Stanislaus Parish, Erie. Also pictured are altar server Scott Husted, left and Msgr. Bernard Urbaniak, pastor of St. Stan’s. Lake Shore Visitor: June 14, 1996. Photo by Michelle Mahoney.
The plan was to bring the Altar out to be under the dome like in a Basilica; the footprint of the Church was already in the shape of the Cross. Everyone would now have full view of the Altar.
St. Stan’s would also now be more accessible with a ramp and renovated confessionals.

When Fr. Bernie asked for volunteers to clean the church after the renovation was complete, “the people came through the doors in tears, they thought it was beautiful!”  The character and historical significance were still there.  The Church was warm and inviting. It was not modern or cold like other renovations or newer built Churches. This is one of Fr. Bernie’s proud accomplishments.

One of Fr. Bernie’s fondest memories was his first trip to Poland in 1999.  “It was the most unbelievable experience of my life!”  When he stepped off the plane, he felt the connection to his Polish roots immediately.  He couldn’t believe it.  These people of Poland went through so much from wars and communism to their own countryman becoming Pope John Paul ll.  What a beautiful and proud country.

In February 2001, Bishop Donald Trautman announced that the 112 year old St. Stanislaus School would close at the end of that school year.  This was due to changing enrollment and financial issues.  Although he tried everything to work around it, it was something Fr. Bernie could not avoid.

On July 26, 2015, Fr. Bernie welcomed the merging of St. Mary of the Immaculate Conception Parish into St. Stanislaus Parish.
On February 13, 2017, after months of study and feedback the Diocese decided to merge St. Hedwig Church with St. Stanislaus and Holy Trinity Church would be become a partner Parish. Fr. Bernie accepted all these challenges with the guidance of the Holy Spirit.

In an address to his fellow priests, our Holy Father Pope Francis remarked, “There is nothing more beautiful for a man than to be called to the priesthood, to be called to follow Jesus, to be with him, to bring Jesus to others, to bring them his work and his forgiveness.”

And this is exactly what Fr. Bernie has done. He is a people’s Priest.  Fr. Bernie said the greatest satisfaction of being a Priest “working with people, visiting the sick in hospitals; encouraging someone, and supporting their dreams.” “That’s been my faith all these years – it’s a changing thing – it’s a faith that is beautiful – We don’t know the future, but we know God is with us. He will always be there for us.”   “God doesn’t change – God is there all the time.” 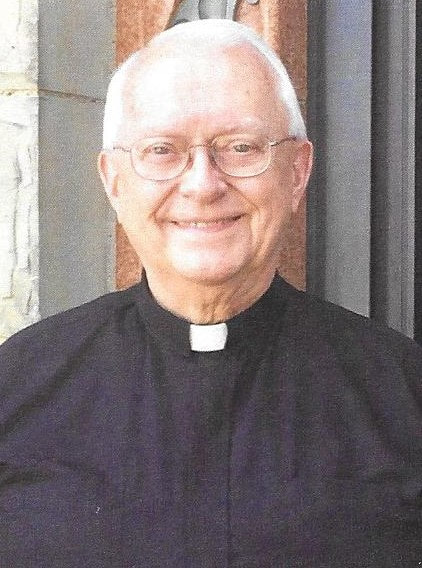 “One kneels in the awareness of his own nothingness and rises a priest forever.” - Saint John Vianney