After the war, General Haller visited the United States in 1923 and 1933 respectively. It is believed he came to Erie on both occasions. However an account of the 1933 visit could not be found at this time. He came again in 1940 to raise awareness of the plight of Poland during World War II.

The following are excerpts from the Trybuna Polska, November 1923 (exact date unlegible). It was translated to the best of my ability using Google Translate.

As he emerged from the train, the crowd cheered.  Over fifty prominent citizens were there to greet him.  Among them were; Fr. Niedbalski, Fr. Robaczewski, Dr. Bednarkiewicz and others.

“I feel happy that I am here.  America and Poland are two sister republics, we have many common features, Erie helped greatly in winning the independence of Poland,” said General Haller, his eyes shining.

Before entering the car that would take him to city hall, General Haller received three girls dressed in American and Polish colors.  They were: Janina Krainska, 8 years old; Klara Majewska, 8 years old; and Eleonora Slomska, 9 years old.  The General kissed them and accepted from them a huge bouquet of roses.

There was also a street parade ending at Perry Square.  Afterwards, he made a visit to the streets of East 13th, where he stopped at the C.Y.M.A. Club and St. Stanislaus Church, which he very much admired.
There was a reception program at the Club:

General Haller said he had never expected such a reception so beautiful, great, and inspiring.
After leaving this program, General Haller went to the Lawrence Hotel.

In the large hotel dining room, decorated in American and Polish flags, there were about 200 people, among whom there were the most famous representatives of the city, some of the city officials and most important Poles.  At the main table, under the wall on which Haller’s portrait was seen, the General sat down, surrounded by the following persons:  Judge or attorney? Walling, Bishop John Mark Gannon; John C Ward  Episcopal Bishop ; Commander Harold Mook; Fr. Ignasiak; Captain Szwaniecki; Attorney Charles English; Colonel King; Attorney F. Bond;  Fr. Konieczny; Fr. Neidbalski; Fr. Robaczewski; Fr. Dembinski; Professor Bobrowski.  Also among the distinguished guests were Attorney Nagorski and wife, Jozef Ignasiak and his wife, Dr. Bednarkiewicz, Dr. Mszanowski and wife; Dr. Shubert and sister.Mr. Jozef Ignasiak gave the opening speech and thanked General Haller for all he has done for Poland, the conviction of Poland as well as Poles living here.  That we will benefit greatly from his visit.

Fr. Franciszek Robaczewski spoke: “In the moments of change, determining the fate of a given nation, providence usually sends a man who will fulfill his task and protect the nation from chaos and destruction.  This is how General Haller is the real Polish man for Poland.  It should be mentioned that General Haller is considered one of the greatest heroes who did not seek fame for himself, but worked with self-denial for the sake of his homeland.”

General Haller spoke last:  “The efforts of your young soldiers in the struggle for Poland let us fight for the republic.  The blue uniform of the Polish army is an icon of your flag, reds and whites make our flags identical, it protects the rights, order, justice, democracy and legitimacy. I will remember the day of my stay with Erie. "

For a long time, unclouded applause thundered in the hall, for the words of General Haller are the undisguised honesty of a soldier who does not play in the diplomatic turns, but goes straight from the heart and goes to his heart.
​
This ended with a joint feast at the Lawrence Hotel. 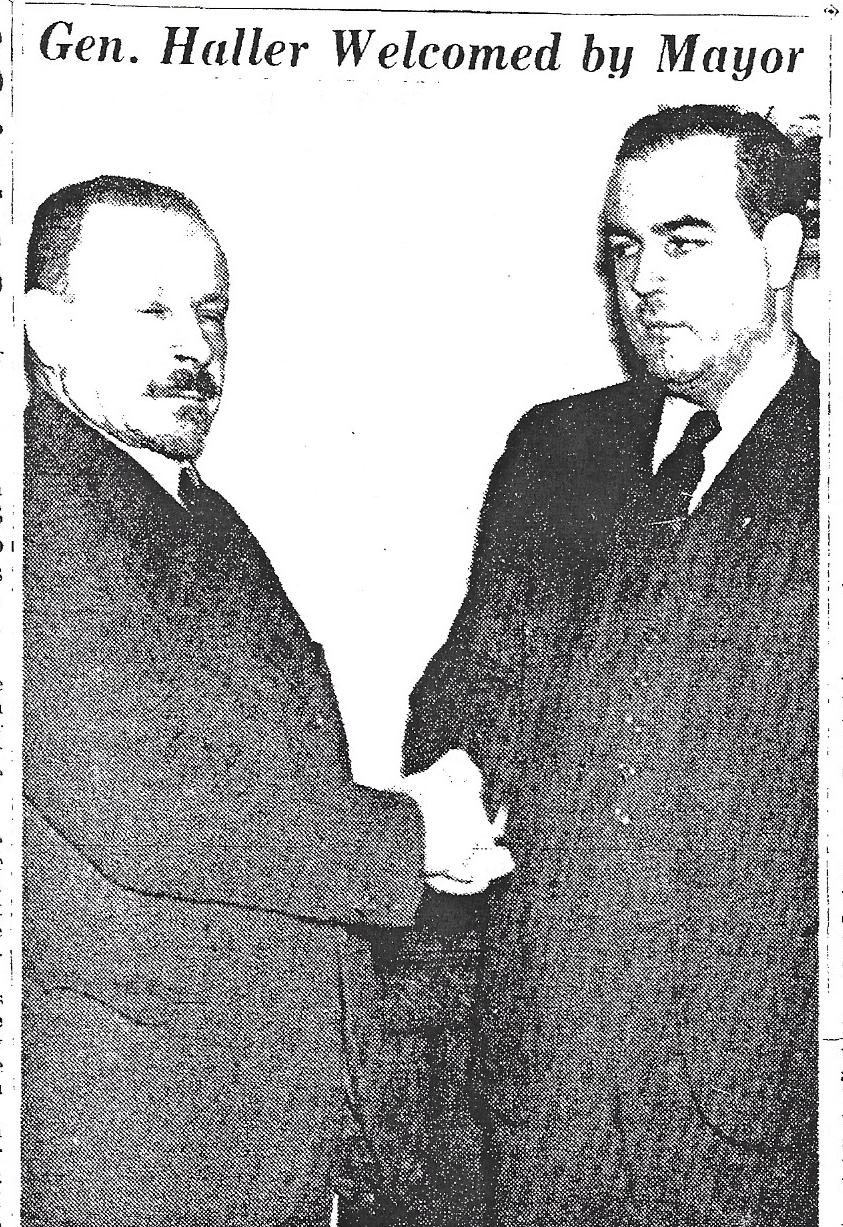 “SIXTY-NINE-YEAR-OLD JOSEPH HALLER, retired general of the Polish army and now Poland’s minister without portfolio, to France, with headquarters at Angers, was officially received Friday afternoon by Mayor Charles R. Barber. General Haller was guest of honor at several functions held Friday afternoon and evening, including a banquet held at the Masonic Temple, attended by 500, and a public mass meeting at Academy high school with more than 1,000 present. General Haller is conducting a campaign in America to raise funds for the distressed people of Poland.” (Frank Schauble photo.)
The following are Quotes from the ERIE DAILY TIMES -January 27, 1940.

“Until Hitler is suppressed the war which has just begun will go on indefinitely.”

“This was the opinion of Joseph Haller, who escaped Poland at the outbreak of the invasion of his native land by the German army.”

“General Haller, with three aides, recently arrived in New York from Poland.  He will tour various parts of the country for the next few months, raising funds for the alleviation of suffering amongst his people in Poland.”

“In a 45-minute address delivered in the Polish language, General Haller dealt severe verbal blows to Hitler.  He showed no antagonism, however, for the rank and file of the German people.”

“At this juncture of his address, General Haller called upon the audience to stand in silent prayer and paid tribute to the Polish people who have died so far in this war.”

“Don’t cry about our losses in this war,” said the general, “but keep on fighting until Poland is restored,” he said.

“After the German army invaded Poland, the Polish people were given a suitcase, their clothing, about $5 in money and ordered out of their homes, after which Germans from other lands were brought in to occupy these homes, General Haller said.”

“Because of such treatment received by the Polish people by the German army, under command of Herr Hitler, the people of Poland today are in dire need of food, clothing and other necessities of life and General Haller is appealing to the good people of America, the Red Cross, the Polish Relief and other organizations to assist the millions of people “back home” in their battle for life.”

“Attorney Thomas M. Mszanowski opened the program at Academy auditorium last night.  Dr. Felix Shubert, president of the Erie School Board, presided as master of ceremonies.  Professor J. Magdania of the Polish Alliance appealed to the audience to give every possible assistance to General Haller in the drive for funds for the Polish people.”

“Attorney Charles H. English delivered a most interesting address.” “There is no justification for the invasion of Poland,” said Attorney English.  “The excuse that Germany gave for its invasion was very weak and Russia didn’t even attempt to make an excuse,” he said.”

“While most Americans are against America actively participating in a European war, yet we can have our sympathies for Poland.  The character of American citizens of Polish extraction, justifies our co-operation in assisting the needy of Poland.”

“The program opened with the singing of the “Star Spangled Banner” and the Polish National anthem by Mrs. Theresa Mozdy Gorski, accompanied by Leo Weiner.  Prior to the opening of the program selections were furnished by the Polish Falcon Band Nest  No. 123.  Selections were played by St. John’s Kanty college orchestra and songs were sung by the same college choir.”

“He then was taken to Kanty college, south of Wesleyville, where he was given a reception by the priests and students.”
​
“Saturday, General Haller and his three aides left for Cambridge Springs, where he will speak to the students at the Polish Alliance College.”