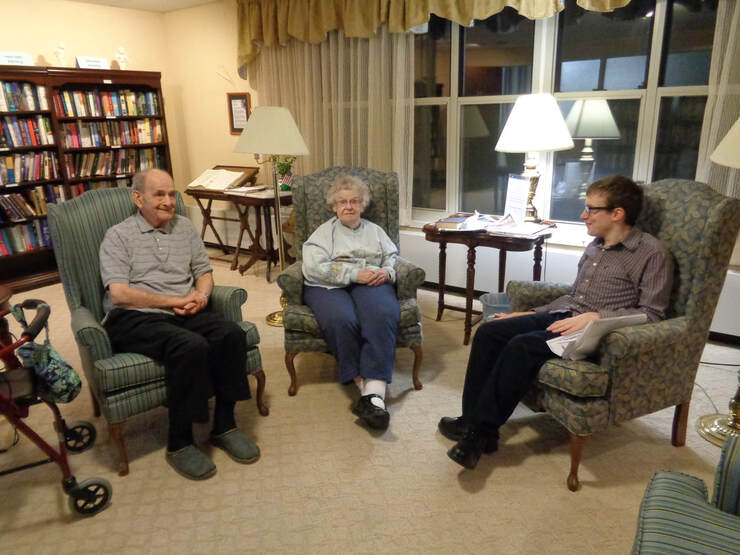 
I met Mr. Joe Habas at his residence at Sarah Reed Senior Living, where he moved to be close to his wife Wanda who was a resident there in the Nursing Center.

It was the end of the First World War November 11, 1918, and Frank Kulig celebrated with everyone else.  Unfortunately, the weather was bitter cold and he contracted pneumonia and died, leaving wife Mary, a widow with seven children.

The Kulig family helped Mary as much as they could, and she eventually took in boarders to help with expenses.  This is where she met Vincent Habas, one of the boarders. They had actually known each other in Poland.

They married in about 1920, and had four more children; Felix, Joe, Edward, and John.

Tragedy was to strike again in 1927, when Vincent Habas was killed in an industrial accident.  Joe’s mother was now a widow with eleven children.  Joe was five years old and does not remember much about his father. (In fact, he did not know till he was older of the background of his two families.)

With the help of the Kulig family and friends, church, and neighbors, they were able to survive.

Joe’s Kulig siblings were much older and brother Eugene was considered the disciplinarian.  The younger Habas brothers even thought that he must be their father.  Eugene was home much of the time because he had polio at a young age and had a shortened leg.  However, he eventually became a cook, a tool crib supervisor at Parker White Metal, and an accordion player for the Osiecki Band. 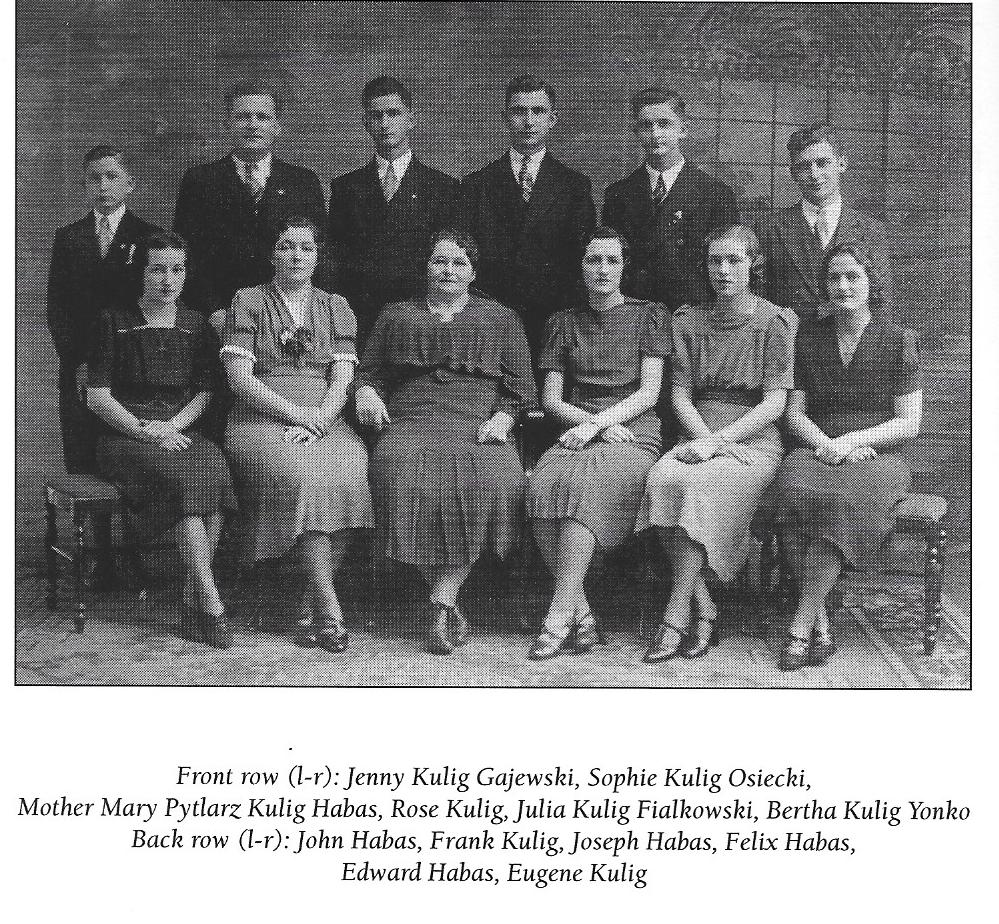 Joe Habas was known as “Jasco.”  In Polish, Joseph was Yush-ko.

Mr. Habas wrote an autobiography in 2008, entitled “The Life of Jasco.”  This was done at the urging of his children and grandchildren, to record the history of his family. I was honored to receive a copy of this book and learn about growing up Polish and the hard lives he and his family endured and were able to overcome and become successful. 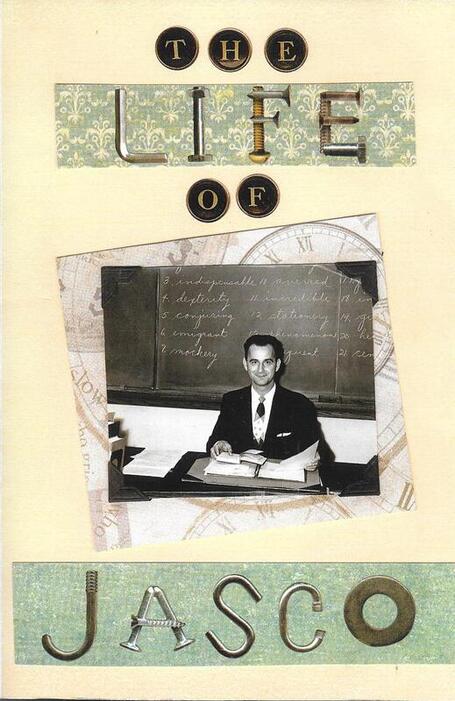 Joe grew up at 1224 East 8th Street, and is a lifelong Parishioner at St. Casimir’s. He attended St. Casimir School and was an Altar Boy. Joe was even named “Altar Boy of the Year,” for the essay he wrote about being a server and winning a citywide contest. 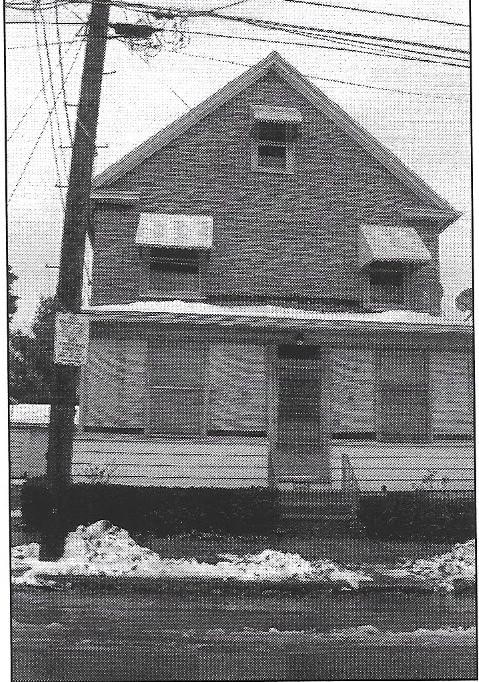 Kulig-Habas Homestead 1224 East 8th Street.
With the help of Msgr. Dlugolecki of St. Casimir’s, Joe was able to attend Kanty Prep.  In the middle of his sophomore year, Joe wanted to transfer to East High School, where many of friends went and that he grew up with. After much convincing, his mother relented and using all his credits from Kanty, Joe was able to graduate after 3 ½ years at the age of 17 in 1940.

In December of 1942, he received his draft notice for the United States Army, and served for three years. During his time in the army, Joe was first stationed at Ft. Lewis, Washington.  He found out that an old neighbor Fr. Leo Rafalowski was at a near-by location. Joe met up with him and even had a chance to serve Mass with Fr. Leo on a couple of occasions.

Joe also participated in D-Day plus three, on Utah Beach. He was a radio operator.  Towards the end of the War, Joe arrived near Munich, Germany and a slave camp of Polish Refugees, who were slave laborers under the Nazi regime.  They were excited to see an American who spoke Polish, and wanted to come to America with him.   They cried, “Cuda, Cuda, Cuda,” which meant “Miracle, Miracle, Miracle!”  Joe had a hard time convincing that that it was not in his power to make that happen.

​After the war, Joe was able to attend Alliance College in Cambridge Springs, PA., and later attended Gannon College graduating with a BA in 1949. He became a teacher and guidance counselor.


Joe Habas met up with Wanda Jakubowski at a teacher’s conference at Strong Vincent High School in October 1950.  By that time, Wanda was already a nurse in the Harborcreek School District.  They had already known each other growing up as neighbors and classmates at St. Casimir, although Joe was about three years older.

They began dating each other and were both dating other people; but fell in love and were engaged in April 1951 and married in August of 1951 at St. Casimir Church. 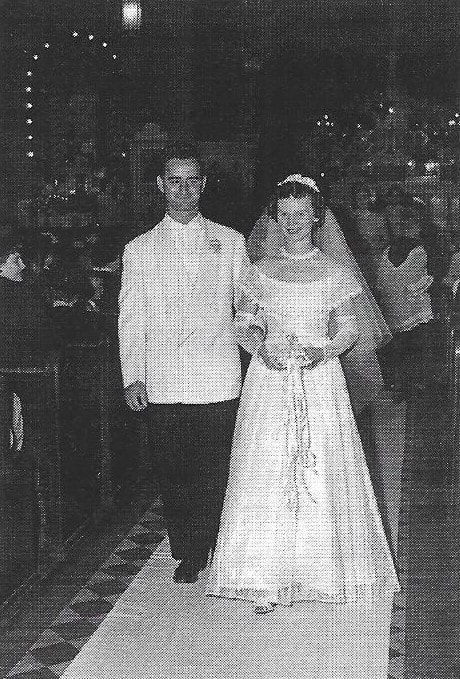 I do not have much information of Wanda’s early years, except that her parents were Stanley and Stella Jakubowski, and her mother was a Pazdziesz from home.

From the Erie Morning News dated September 14, 1989, staff reporter, Liz Allen, in the article of Erie’s Polish Heritage, “Polish couple grasps past, eyes future,” “Wanda’s mother, Stella, immigrated to Erie as a young girl and learned to be a seamstress at the Pogorzelski Dry Goods store at 13th and Parade.  Stella met her future husband, Stanley Jakubowski, at a dance sponsored by Alliance College, where he earned a degree as a tool and die maker.”

According to her obituary, Wanda graduated from East High School, and earned a Bachelor of Science degree at Villa Maria College and her nursing degree from St. Vincent School of Nursing. She served as a nurse at Spencer Hospital in Meadville, St. Vincent Hospital in Erie, and Harbor Creek High School, and retired after many years at the Barber National Institute. 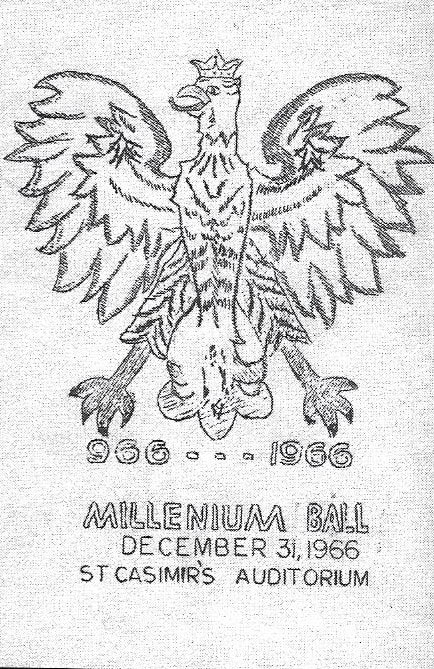 Millenium Ball Program
They were also instrumental in the “Krakow Square Festival,” in 1986. It was held on the grounds of St. Casimir’s and replicated the town square in Poland.  The money raised was $18,000 and was used to provide medicine for Poland, under the program, “Americares.”  Joe Habas was one of those chosen to accompany the cargo plane to Poland. Also aboard were journalists who came to gather stories of the Polish people’s oppression. When they got there, Joe asked a few Polish citizens about their plight.  However, no one wanted to talk to him fearing reprisal.  He even asked a Priest to talk to him. The Priest told him in so many words that the Polish were going to heaven and the Americans needed the prayers because “we have all the luxuries in life and still complain.”  With that, the journalists left Poland and went to other countries, while Joe and the other volunteers stayed behind to issue the medicine to those in need. 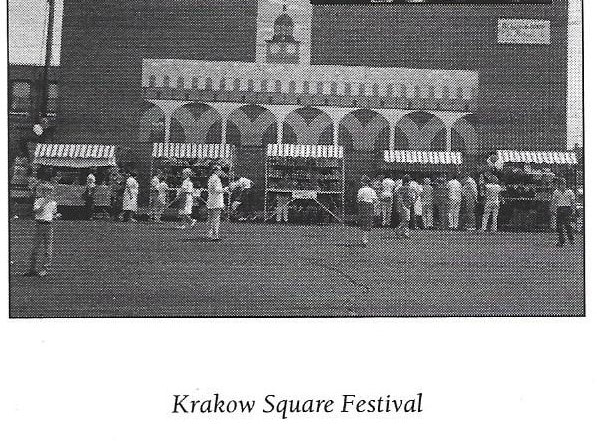 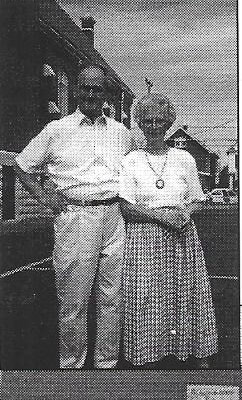 Joe and Wanda at the Krakow Square Festival. 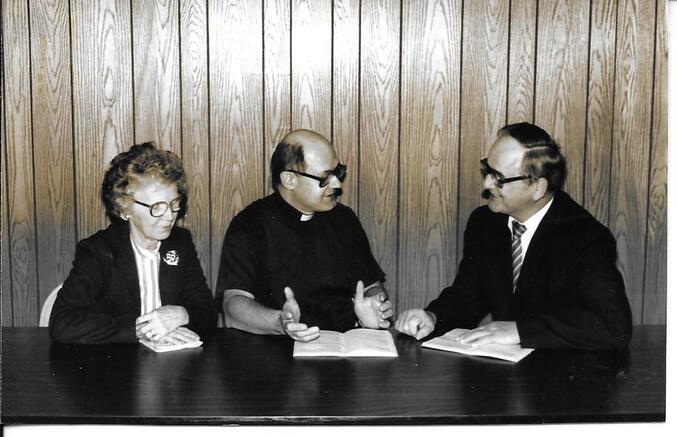 Planning St. Casimir's 75th Anniversary with Fr. Dan Kresinski, 1989. Photo courtesy of Liz Allen.
Wanda was also involved in AIDS awareness activities, writing a booklet for school children The Alphabet of AIDS, and creating a panel for the AIDS quilt.

I learned so much from Joe Habas, and I am thankful to have spent the early evening with him. 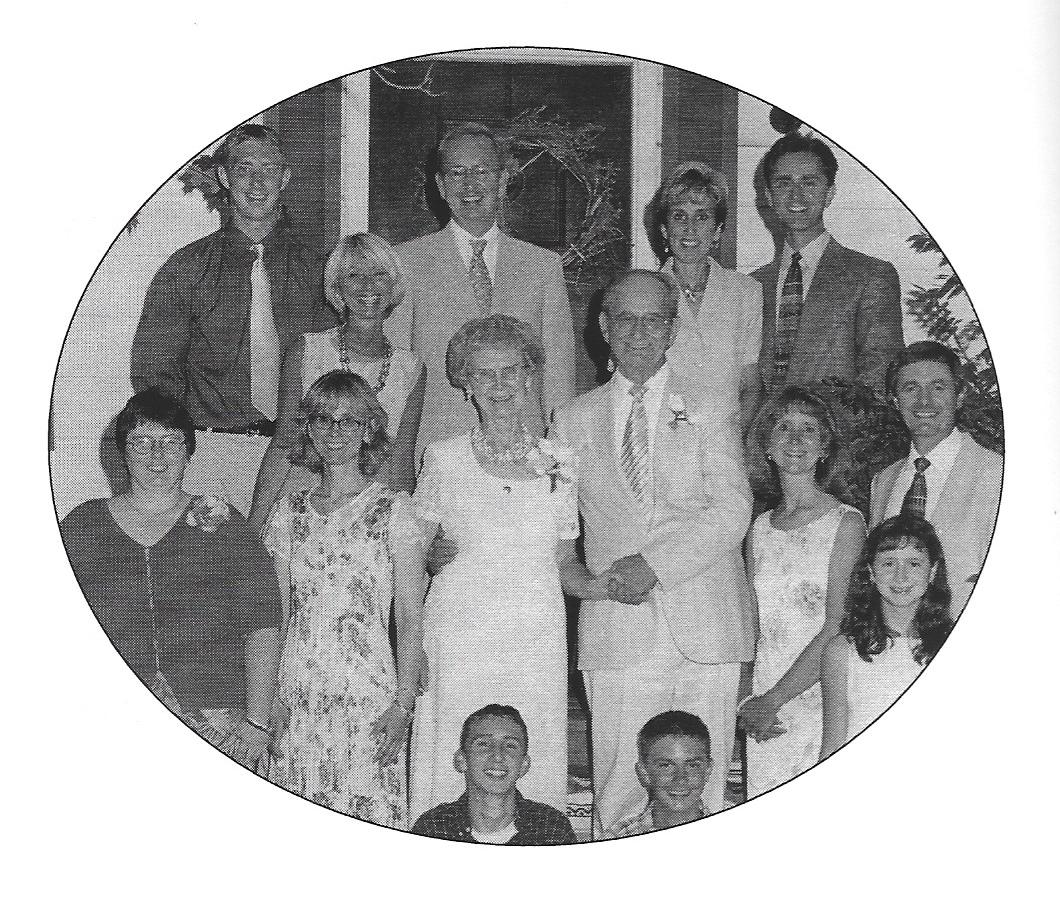