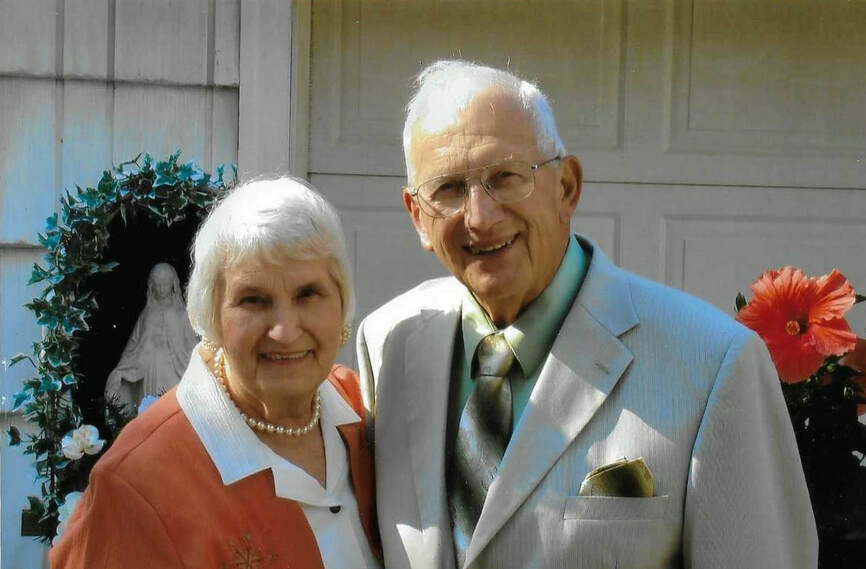 Joan Victoria Tomczak Oldenski is the daughter of Leo Tomczak and Veronica Wulf Tomczak. She was born on July 27, 1930. Her nickname was Jena.  Her grandparents came from Poland.   Her father, Leo, worked at Griffin Manufacturing and later as a crane operator at Erie Engine.   Her mother, Veronica, completed school up until sixth grade, then had to help support her family by working at Griswold Manufacturing.

Growing up in the shadow of St. Stan’s, she remembers having processions with benediction every first Friday, and the many years of Novenas to Our Lady of Perpetual Help.  The priests she remembers are Frs. Kacprowicz, Pol, and Kataczynski (who was bashful and nice.) The Pastor, Msgr. Stanczak was nice, but stern. At Christmas time, Msgr. made sure the children each received a box of candy.  The first grade was taught in Polish.  Mrs. Oldenski recalls the nuns as all good who “taught the right stuff.”  The neighborhood was a place where everyone knew each other and palled around.  From seventh grade through high school she worked for Malanek’s Grocery at 759 East 12th Street (which is now Bay City Tattoo.) Mrs. Oldenski attended St. Benedict Academy and graduated in 1949.

Scrapbook of Mrs. Helen Tomczak Grygier.
John Andrew Oldenski was born on June 5, 1933. and grew up in on a farm in Corry, Pennsylvania, where there were quite a few Polish people. His paternal grandmother’s maiden name was Aniela Rynkiewicz. His maternal grandmother was baptized in Salzburg, Austria. His parents were Joseph and Nellie Kuss Oldenski, and they were born in Pittsburgh. He had a sister Eleanore Kozik who is now deceased.

The Oldenski family attended St. Elizabeth Church in Corry. There was a PNA club where his grandparents belonged. He attended Cobbs Corner Schoolhouse, which was a one room schoolhouse with eight grades.  They had one teacher for all eight grades. Even though it was a public school they said the “Our Father,” and read a Bible Verse.  They also saluted the flag.

A Polish priest would come around to the farms to hear confessions in Polish. They would then pay him a stipend. During the Depression, Mr. Oldenski’s father worked for the WPA. He was a farmer by profession but after John got back from serving in the Army, his father found work at Associated Spring-Barnes Group The farm had become too hard to manage. His mother worked for Corry Hospital and Molden Fiber Glass.
Some of his favorite childhood activities included visiting his cousins and making his own skis. They did not get electricity until 1951. He attended Youngsville High School for two years and then went to Corry High School from where he graduated in 1951.

John and Joan met each other at a PNA dance in 1958 that she attended with friends from school.
John and Joan were married at St. Stanislaus Church on June 6, 1959.  They had a big Polish Wedding at the Polish Falcons Nest 610.  As with many Polish Weddings, breakfast was at noon. The reception started at 2:00 PM with Zielinski as the band. The cook, Mrs. Pastewka, served chicken with all the works, (except for Msgr. Stanczak who had to have fish!) 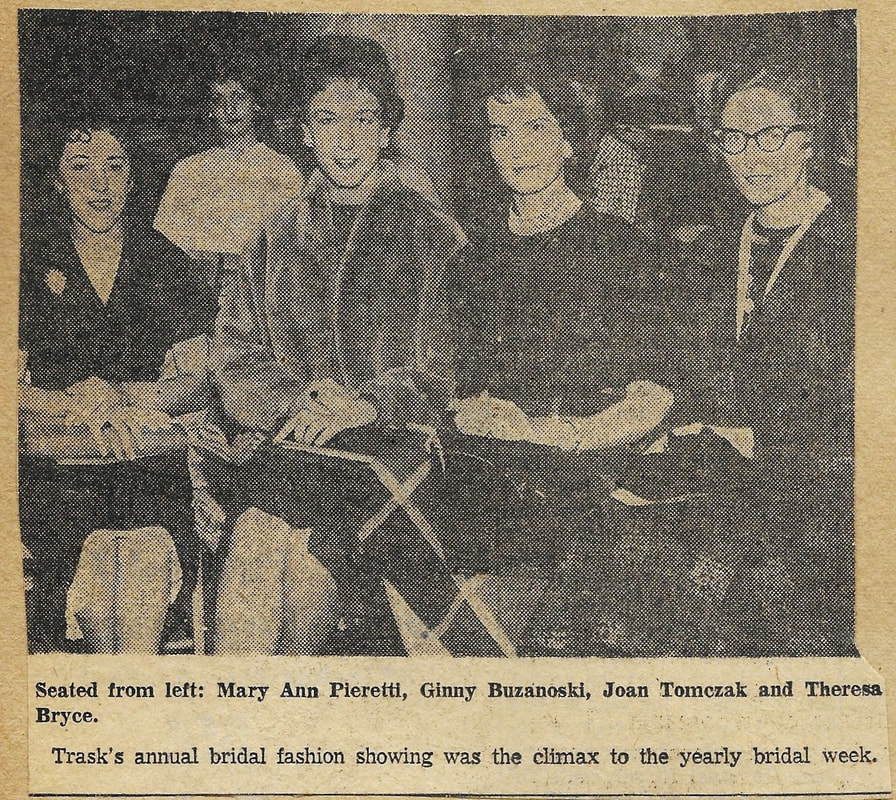 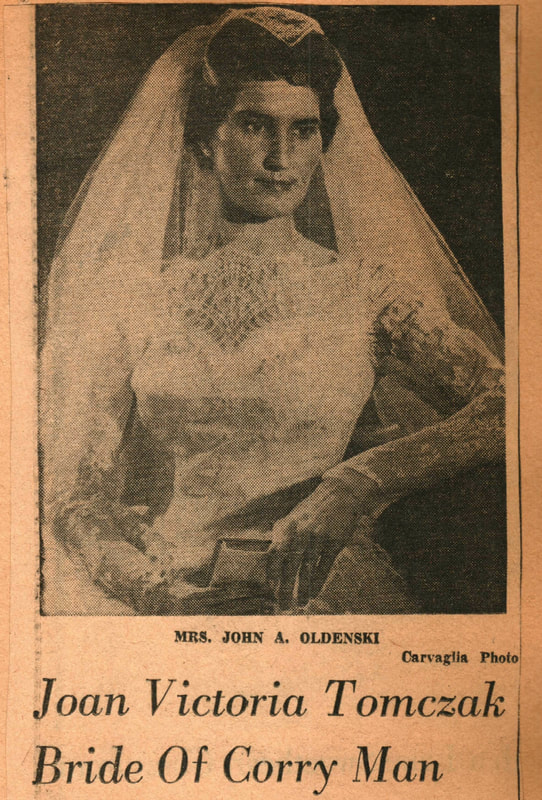 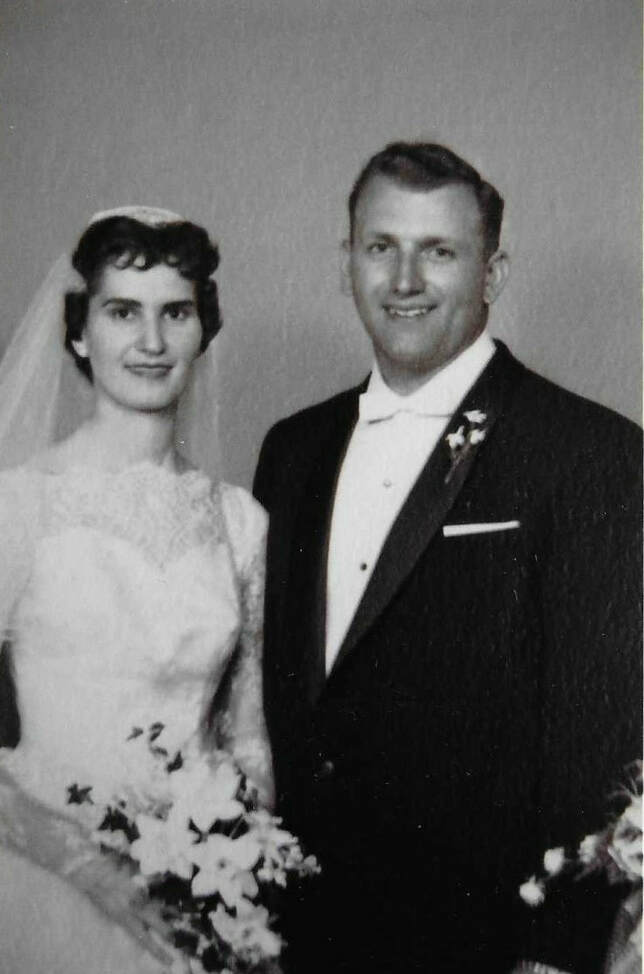 Mr. and Mrs. Oldenski were very active at St. Stanislaus for many years, from serving on various committees to singing on the choir.  Today, they are usually at St. Stan’s for daily Mass and then go to Tim Hortons where they keep in touch with everyone. 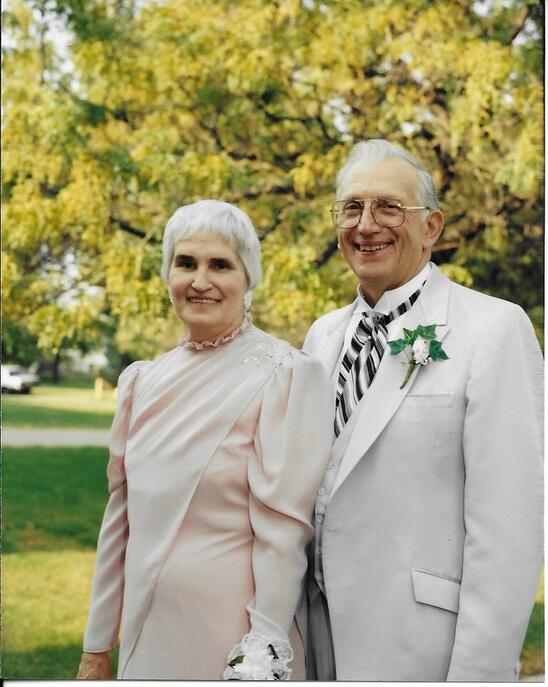 John and Joan Oldenski at the wedding of their daughter Stephanie to Bill Wycech.
Special thanks to Deborah Oldenski and Stephanie Oldenski Wycech for their cooperation and assistance.

***** UPDATE *****
John Oldenski,  passed away peacefully on June 18, 2021, at the age of 88.
Obituary
John Andrew Oldenski, 88, passed away peacefully on June 18, 2021, surrounded by his loving family. John was born in Corry, PA on June 5, 1933, to Nellie (Kuss) and Joseph Oldenski.
He attended a one-room schoolhouse followed by schooling at Youngsville Middle School and Corry High School. After school, he served in the United States Army.
After the Army, John met his “Honey,” Joan (Tomczak) at a local dance. They married on June 6, 1959, and they went on to have four beautiful daughters together. John was a wonderful husband and a great father. He and Joan celebrated 62 years of marriage together this year.
John retired from Zurn, but retirement just meant he had more time for home projects, teaching his grandkids the many ways you can fix things yourself, and more time for day trips with his wife and family. They loved going for rides to Corry. You could always find them every morning at Tim Horton’s for breakfast and coffee before it was time to go home to work on a project or off on an adventure. He was an avid Catholic and did many things to help at his home parish, St. Stanislaus. A huge Notre Dame fan, Sarge never missed a game on Saturdays; whether it was watching the game somewhere his grandkids talked him into going to, at home on his couch with his Honey, in person at Notre Dame Stadium, or in the car going on one of their many adventures. John never missed anything that had to do with his grandchildren. Because of that, he will be missed immensely.
In addition to his parents, he is preceded in death by his sister Eleanor and her husband, Walter Kozik. His brother-in-law Jerome and his wife Frances Tomczak, brother-in-law Raymond and his wife Clara Tomczak, brother-in-law Robert and his wife Joan Tomczak, brother-in-law Eugene Tomczak, brother-in-law Leonard Tomczak, brother-in-law Patrick and his wife Rose Tomczak, sister-in-law Geraldine Tomczak and brother-in-law Mitch Oblinski.
Along with the love of his life, he is survived by his four daughters, Paula (Russell) Dworakowski, Stephanie (Bill) Wycech, Debbie Oldenski, and Monice (Paul) Urbaniak. His grandchildren, Andrea (David) Wallis, Erin (Greg) Ross, and John Paul (Miranda) Urbaniak. John was blessed to know his great-grandchildren, Cooper and Andrew Wallis, and Sophia Urbaniak, all of whom he treasured and loved greatly. He is also survived by his nieces Teresa (Brad) Castleman and Donna Kozik. He is further survived by his sisters-in-law, Louise Oblinski, Teresa Tomczak, and Elaine Tomczak, brother-in-law, Daniel Tomczak, as well as many nieces, nephews, cousins, and wonderful friends.

Joan Tomczak Oldenski, 91, of Erie, joined him in heaven on June 6, 2022.
Obituary
Joan "Jena" Victoria Tomczak Oldenski, 91, of Erie, joined her “honey”(John Oldenski) in heaven on June 6, 2022. Born on July 27, 1930, in Erie, she was the daughter to Leo and Veronica (Wulf) Tomczak. "Jena" attended St. Stanislaus School and graduated from St. Benedict’s Academy. While she worked small jobs for a number of years, her true passion was being a mother and home maker; she met the love of her life, John Oldenski, at a dance and then went on to be married for 62 years and have four beautiful daughters. "Jena" was a very devote Catholic and prayed to the Blessed Mother every day. The strength of her faith was contagious and endearing- she was always praying for everyone. Joan was known for always making soup on Saturdays, her chicken noodle soup was everyone's favorite. If there was a picnic she was invited to, pie squares were surely her go to. She loved and thrived on being a “Nana” to her grandchildren and great grandchildren. She was blessed to go on many trips throughout her lifetime; as small as daily breakfast trips for coffee to bigger trips to places such as Notre Dame, Saint Bonaventure, Ohio, and Peek n Peak New York to name a few, she was always up for a road trip with her "honey" behind the wheel. "Love you, love you!" In addition to her parents, Joan is preceded in death by her husband, John Oldenski, her brothers Jerome (Frances) Tomczak, Raymond (Clara) Tomczak, Robert (Joan) Tomczak, Eugene Tomczak, Leonard Tomczak, Patrick (Rose) Tomczak, sister-in-law Geraldine Tomczak, brother-in-law Mitch Oblinski, sister-in-law Eleanor (Oldenski) Kozik and her husband Walter. She is survived by her four daughters, Paula (Russell) Dworakowski, Stephanie (Bill) Wycech, Debbie Oldenski, and Monice (Paul) Urbaniak. Her grandchildren, Andrea (David) Wallis, Erin (Greg) Ross, and John Paul (Miranda) Urbaniak. Joan was blessed to know and love her great-grandchildren, Cooper and Andrew Wallis and Sophia Urbaniak. She is also survived by her sister, Louise Oblinski, her brother, Daniel Tomczak and her sisters-in-law Theresa and Elaine Tomczak. She is further survived by her nieces Teresa (Brad) Castleman and Donna Kozik, as well as many nieces, nephews, cousins and wonderful friends.


​On A personal note:
Mr. and Mrs. Oldenski were among the first people I interviewed for my Erie Polonia history project. I have known the Oldenski family since I was a kid. Everyday John and Joan would attend Mass at St. Stanislaus, followed by a visit to “ St. Timothy’s” (Tim Hortons). In his eulogy, (for Mrs. Oldenski) Fr. Jason said that when he met them he didn’t know this reference and thought they were going to another Mass at a parish far off in the Diocese. Imagining the confusion he must have had was priceless! At Tim Hortons they knew everybody! I had never seen them sad or upset ever! They were truly the happiest people I knew! Every Christmas and Easter I would get a $5 bill from them like I was a grandchild. They along with their twin daughters Debbie and Stephanie, sang at both my grandparents funerals. They were also on the CD’s that the St. Stan’s choir produced. I learned so much from just being in their presence and I am a better person for knowing them!
Spoczywaj w pokoju! Rest in peace!
-Bobby J. Sulecki