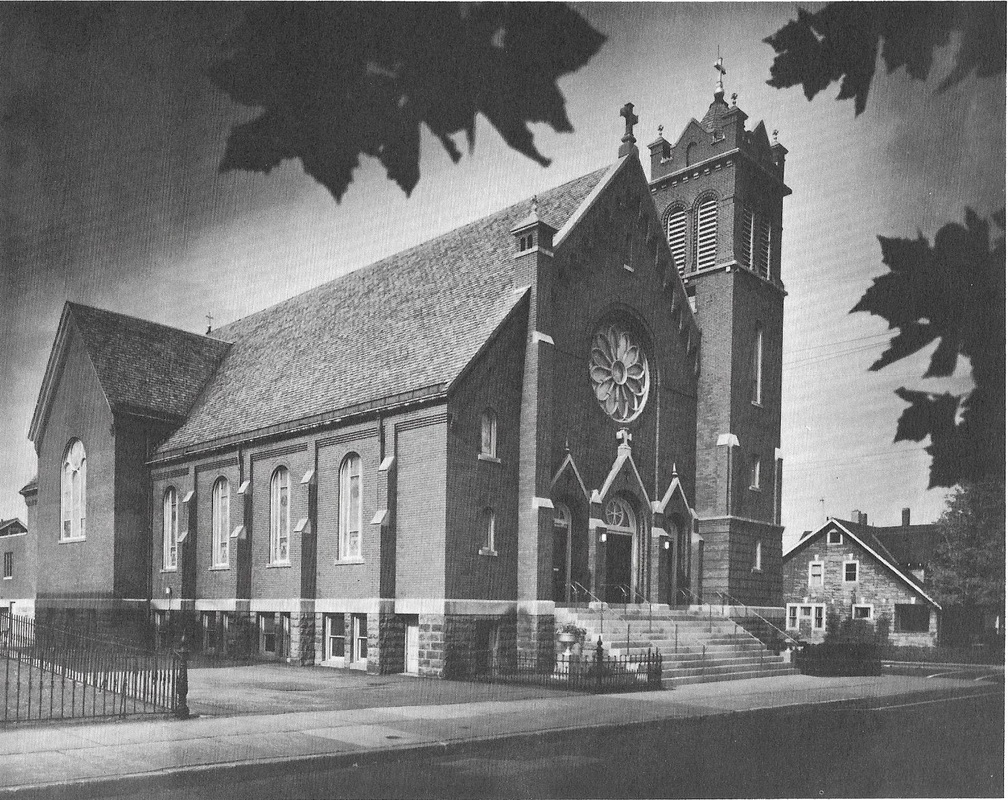 St. Casimir Church Built in 1914. Picture Circa 1964.
As Erie’s Polish Community continued to grow, there was a need for a fourth Polish Parish. Under the leadership of a social club, the “Huzary,” the people organized to request their own parish. They petitioned Bishop John E. Fitzmaurice who concurred.  The “Huzary” originally was established by St. Hedwig Parish, but the emigres moved away from the St. Hedwig vicinity to be closer to their places of work, the Hammermill and General Electric Companies.
The church was named after St. Casimir, a Polish prince renowned for his generosity to the poor.
In 1914, Congressman M. M. Liebel Jr., who represented the Erie/Crawford District, donated the property for St. Casimir Church at Sixth and Hess Avenue.  The congregation of 150 families bought an additional 350 ft. of adjoining property through contributions.
Bishop Fitzmaurice officiated at the ceremony of the laying of the cornerstone of November 15, 1914.  More than 1500 people attended as well as nine priests; Reverend V.G. Reiser, St. Michael’s; Reverend M. Matysiak,  Reverend Andrew Ignasiak, and Reverend Stephen Dlugolecki from St. Stanislaus; Reverend F.J. Bender from Sacred Heart; Reverend Andrew Jurcak from Holy Family; Reverend J.A. Schwartz from St. Joseph’s; Reverend Msgr. H.C. Winkler from St. Joseph’s and Reverend David Hanley from Girard. 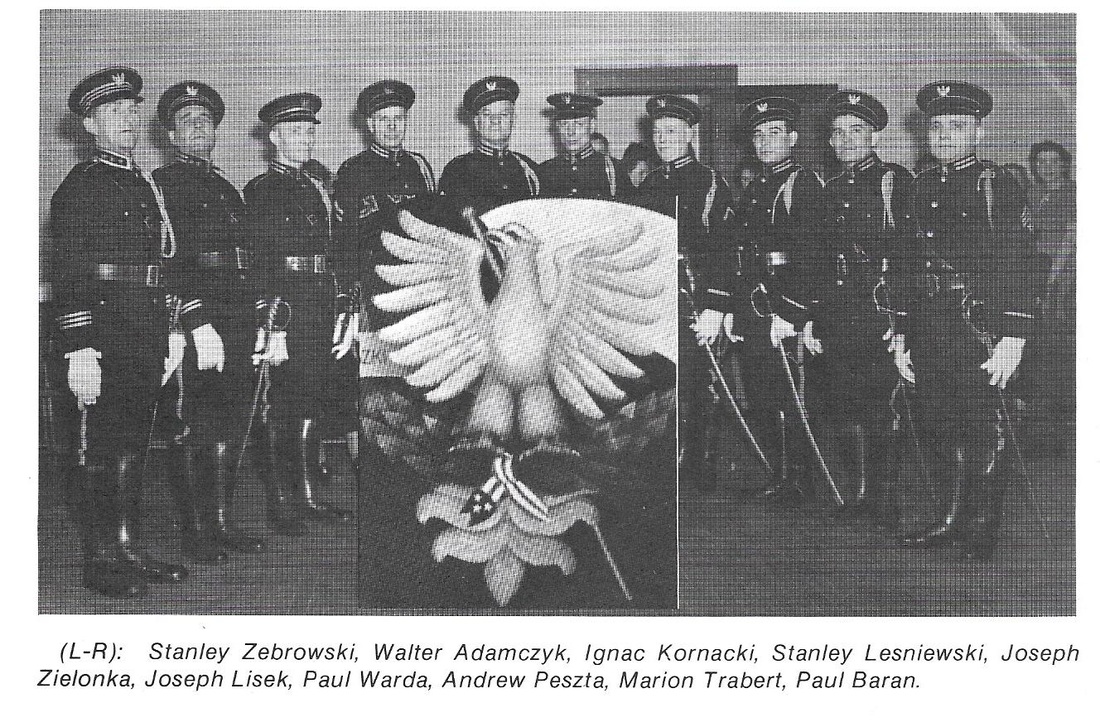 Members of the “Huzary” Founders of St. Casimir Parish in an undated photo.
Construction of the church began in the Spring of 1915 by Liebel-Binney Construction Company at a cost of $30,000. Money was raised by various church organizations who sold chances and held dances to pay off the debt. The St. Cecelia, St. Casimir and Rosary Societies were organized.
St. Casimir Church was formally dedicated on Sunday, March 5, 1916.  Reverend John C. Dembinski was named the first pastor.  The church bells were blessed by Father Dembinski. The largest one was named Casimir, the middle one was named John, and the smallest one was named Mary. 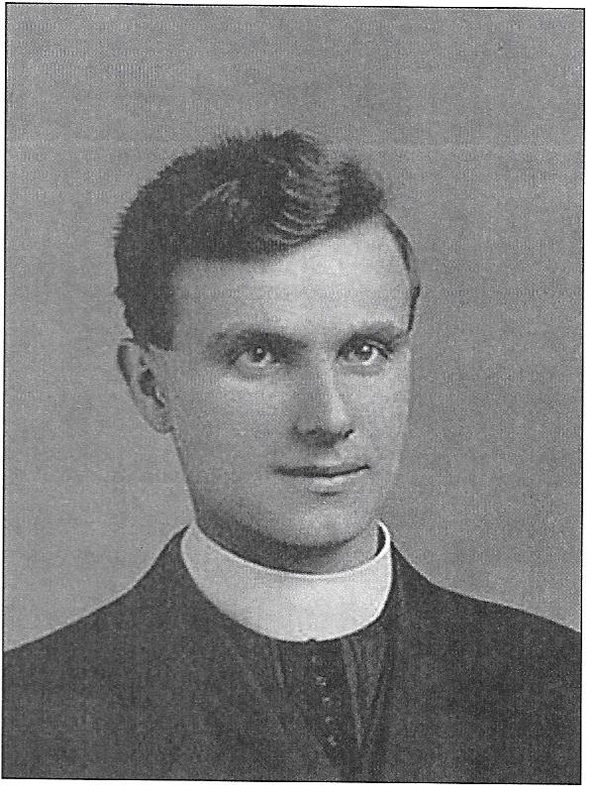 Rev. John C. Dembinski Pastor 1914-1931
The beautiful, large stained glass windows depict the Nativity on one side and the Resurrection on the other.  The windows behind the altar honor St. Casimir and St. Valentine.  The windows near the side altars honor the Immaculate Heart of Mary (Mary’s altar,) and The Sacred Heart of Jesus (St. Joseph’s Altar.) 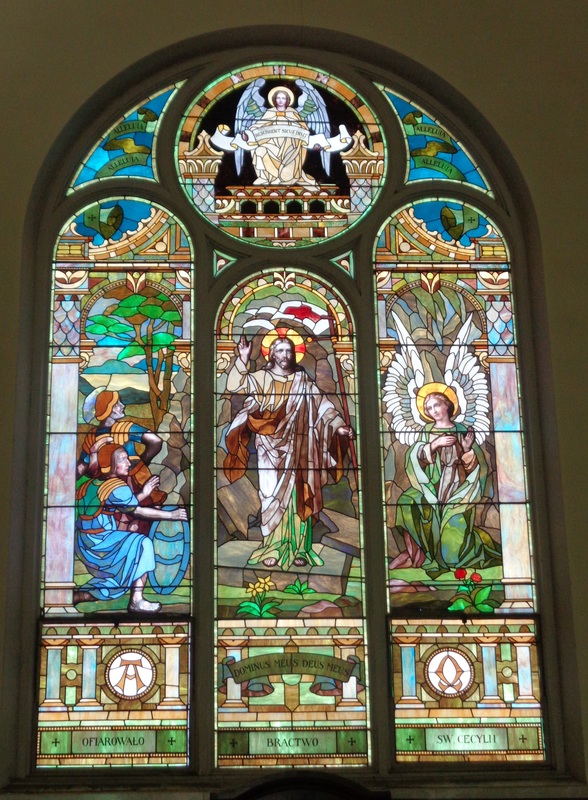 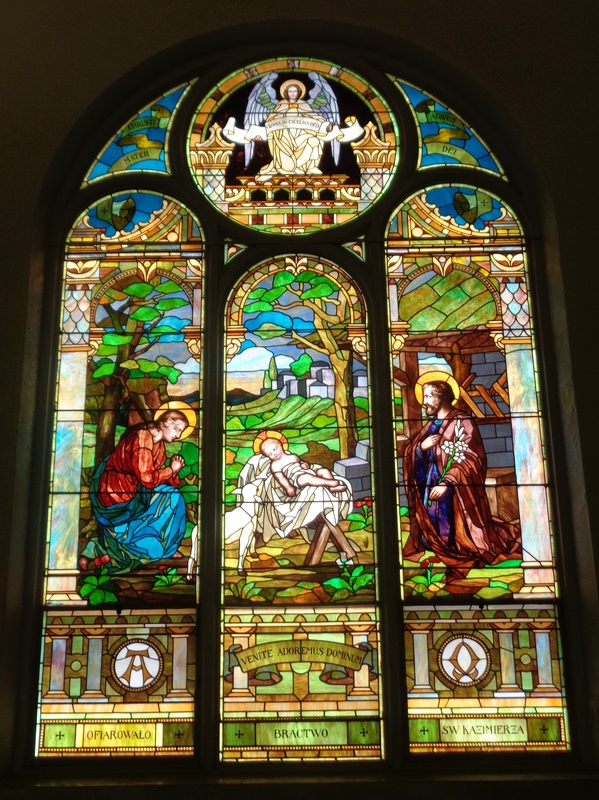 Nativity window
A parade opened the dedication, forming on Tenth and Wallace Streets and marching to Hess Avenue and Atkins Streets. Joseph Grabowski was the marshal and more than 500 people marched with the following organizations; the White Eagle Band, societies of St. Stanislaus Church, Polish Order of Catholic Foresters, Polish Falcon Band, societies of Holy Trinity Church, Polish Falcons, Slavic Falcon Band, societies of Holy Family Church, Slavish Falcons, St. Ann’s Fife and Drum Corps, societies of St. Hedwig Church, parishioners of St. Casimir’s Church, Rt. Reverend Bishop Fitzmaurice and members of the clergy.
The services were in charge by Bishop Fitzmaurice and Reverend Andrew Ignasiak, pastor of St. Stanislaus, celebrated the High Mass.  The musical services were conducted by the choir of St. Stanislaus under the direction of John Krasinski.  After the services, a dinner was held in the basement of the new church, which was given by members of the Rosary Society.  The visiting clergy were guests at a dinner of the new Pastor, Reverend Dembinski at his parish house, directly across from the church.
In 1918, St. Casimir School was officially established.  The Sisters of the Holy Family of Nazareth began teaching in the church basement.  In 1920, the Sisters moved into their new convent at 637 Hess Avenue. 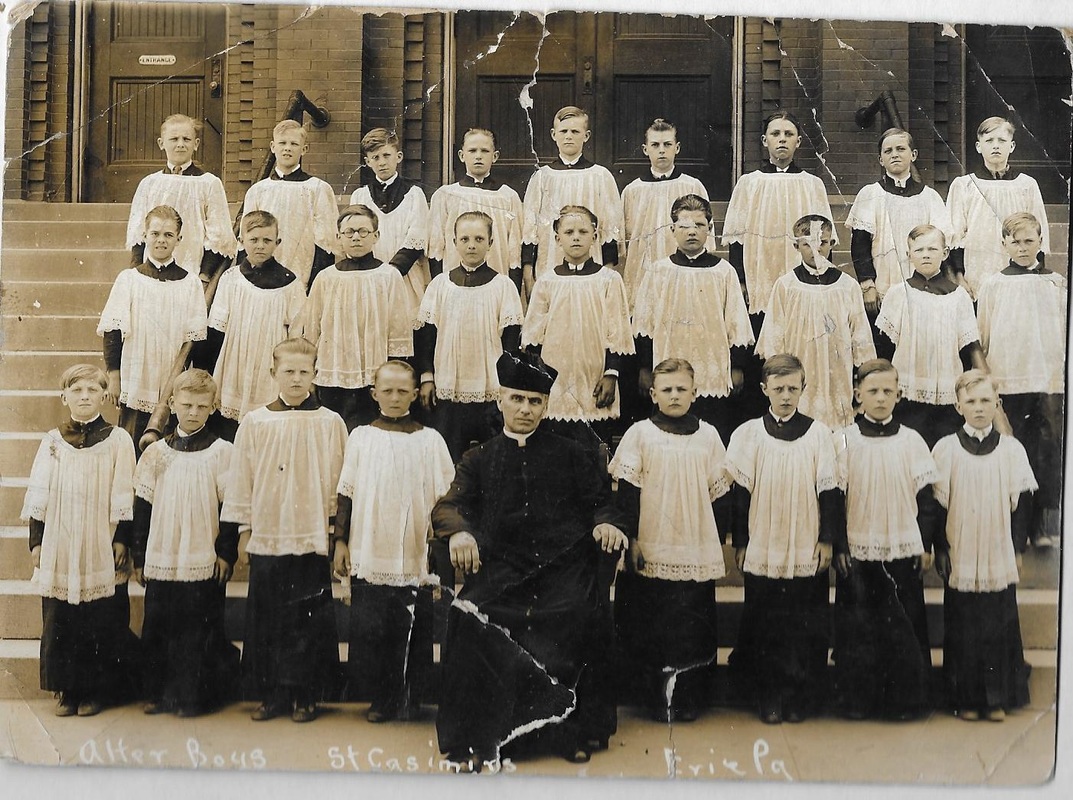 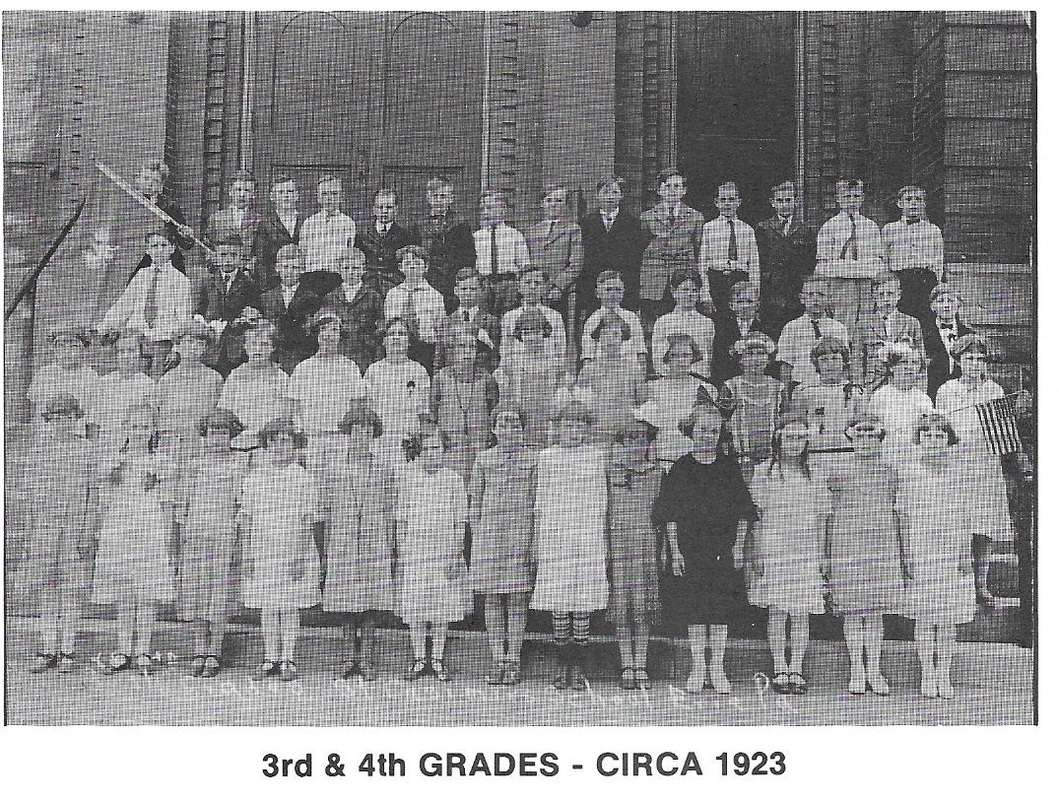 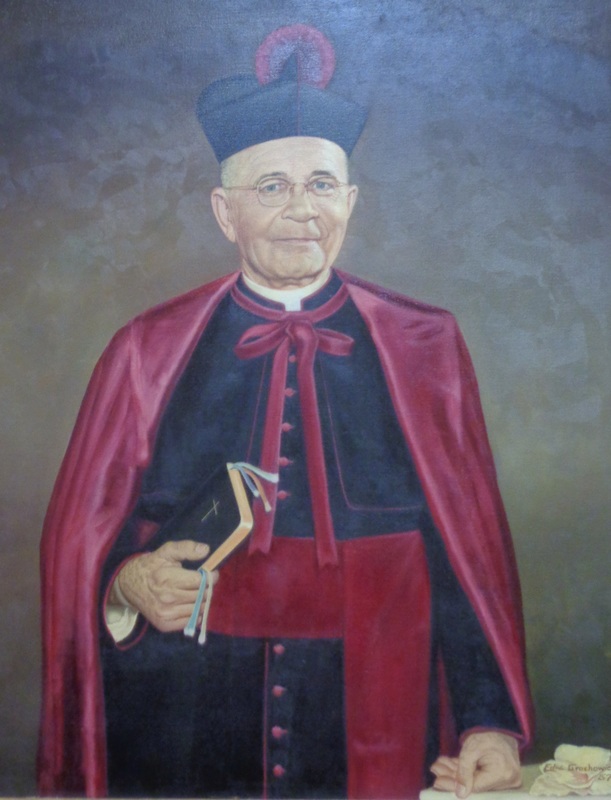 Rev. Stephen W. Dlugolecki Pastor 1931-1967.
In 1942, Reverend Stephen Dobosiewicz was ordained and assigned to St. Casimir as the first Assistant Pastor.
A new St. Casimir School was built and groundbreaking held in 1948 at a cost of $185,000. The architect was Oscar Brenot, and the contractor was S. Niebauer and Sons. 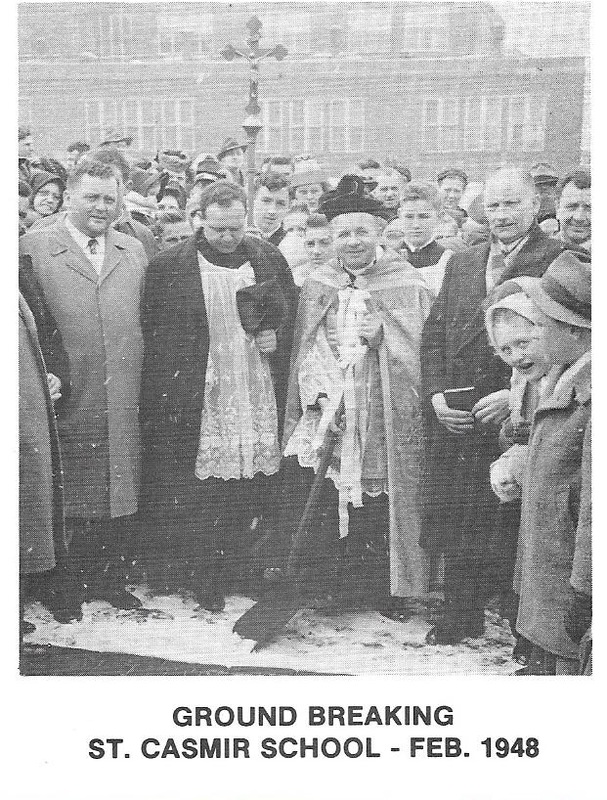 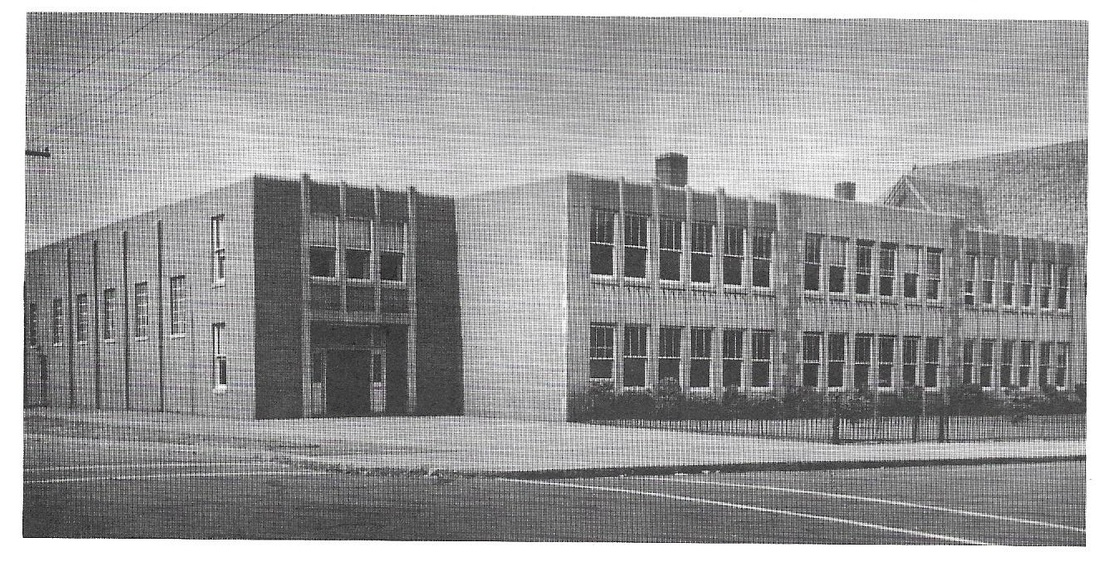 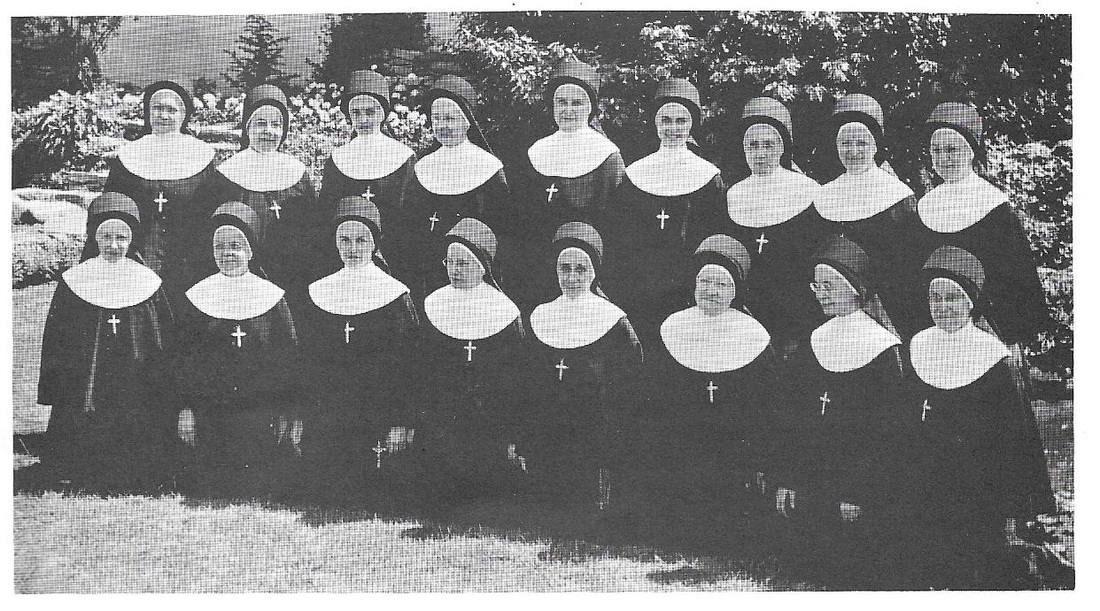 Sisters of the Holy Family of Nazareth.
In 1956, Reverend Stephen Miaczynski was assigned Assistant Pastor, and in 1963 Msgr. Stephen Dlugolecki was named Domestic Prelate.
Father Joseph Gregorek became a resident of St. Casimir in 1965.
In 1966, a Millennium Ball celebrating 1000 years of Polish Christianity was observed on December 31st in the school auditorium with Msgr. Dlugolecki presiding.
Also in 1966, Father Richard Guzowski became Assistant Pastor.
On May 7, 1967, Reverend Msgr. Stephen Dlugolecki died of a heart attack and the Reverend Joseph Kacprowicz became St. Casimir’s 3rd Pastor. 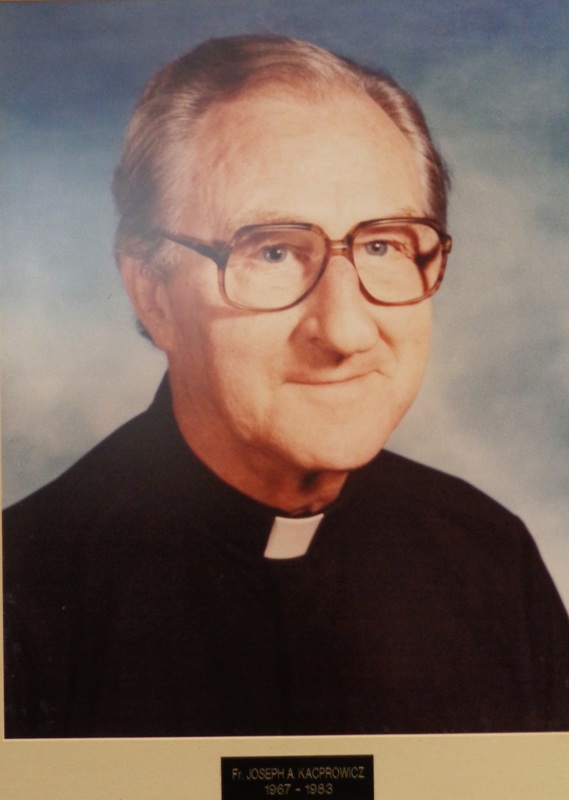 Rev. Joseph Kacprowicz Pastor 1967-1983.
In 1971, as the school population began to decline, St. Casimir merged with St. Ann to form Spirit of Christ School.
In 1975, Father Robert Murray was assigned Assistant Pastor.  In 1980, Father Frank Przepierski was assigned as Resident.
Due to rising costs and declining enrollment, the merged school of St. Casimir’s and St. Ann’s, Spirit of Christ School, closed in 1982.
Reverend Joseph Kacprowicz retired in 1983 and the Reverend Anthony Nowakowski was appointed St. Casimir’s 4th Pastor.
A ramp for the handicapped was built in 1985.
Father Nowakowski died October 20, 1987 and the Reverend Daniel Kresinski was named the 5th Pastor.
Reverend James Ruhling was assigned Resident of St. Casimir. 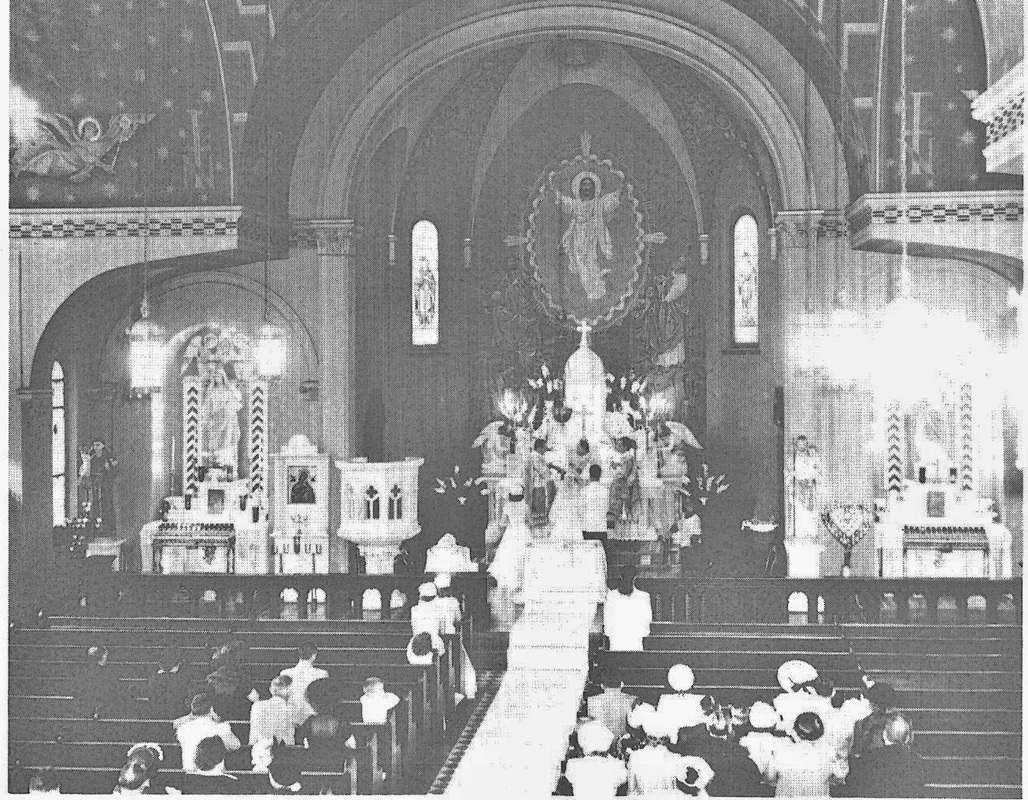 Wedding at St. Casimir in the 1940’s. Note this is before the sanctuary was repainted in the 1980’s. 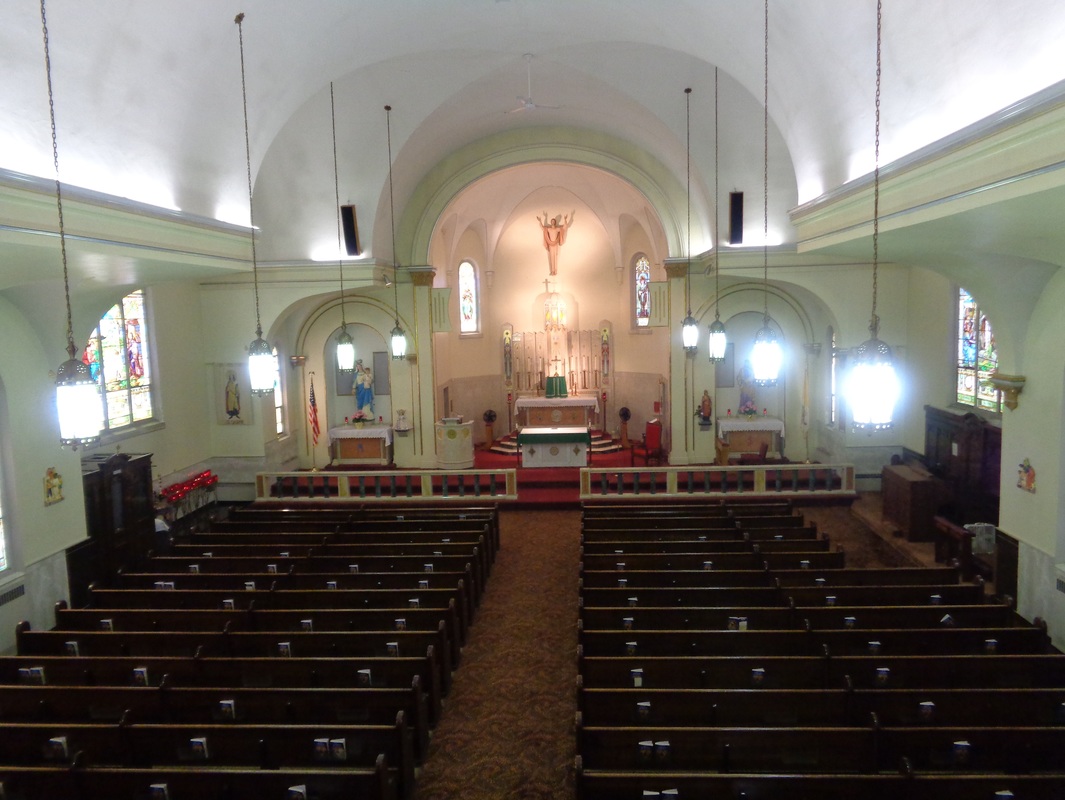 Sanctuary of St. Casimir in 2015.
On March 5, 1989, St. Casimir began its 75th Anniversary celebration with a special Mass.  A Mass and banquet was held on July 2, 1989 with the Most Reverend Michael J. Murphy presiding.
In 1990 Bishop Michael Murphy reassigned the priests of St. Ann, St. Casimir and Holy Family Churches and united these three parishes under the direction of one pastor. He appointed Rev. Robert Craig to this position and then after one year, Rev. James T. O'Hara became the pastor of the tri-parish cluster.  Each of the three parishes retained their own name, each retained its own boundaries, its own church, rectory, and other buildings, its own spiritual and social organizations and its own ethnic identity.
On October 24, 2004, a Great Mass commemorated the 90th Anniversary of St. Casimir Church followed by a banquet.
In 2009, St. Casimir Parish merged with St. Ann's and Holy Family to form: Our Mother of Sorrows Parish.
In 2014 Sr. Casimir Parish celebrated their 100th Anniversary.

In April of 2013, the Bishop of Erie, Lawrence T. Persico, implemented the beginning of a Pastoral Planning Process of the Diocese.
A preliminary plan was announced on April 12, 2016 to designate St. Ann Church as the parish church.  After much feedback and advice, it was determined that St. Casimir Church would be the parish church because the church was in good physical condition, had available parking, and was handicapped accessible.
Therefore, effective February 13, 2017, St. Casimir church was lawfully designated the parish church of Our Mother of Sorrows Parish.  Holy Family and St. Ann’s will remain secondary churches without mission statuses.
Reverend James T. O’Hara will remain Pastor of Our Mother of Sorrows, and Deacon Jerome T. Sobrowski has joined the parish.

Longtime Pastor Fr. James O’Hara passed away on November 8, 2020, at the age of 80. As of November 2022 a new pastor has not been named. Deacon  Sobrowski serves as administrator. 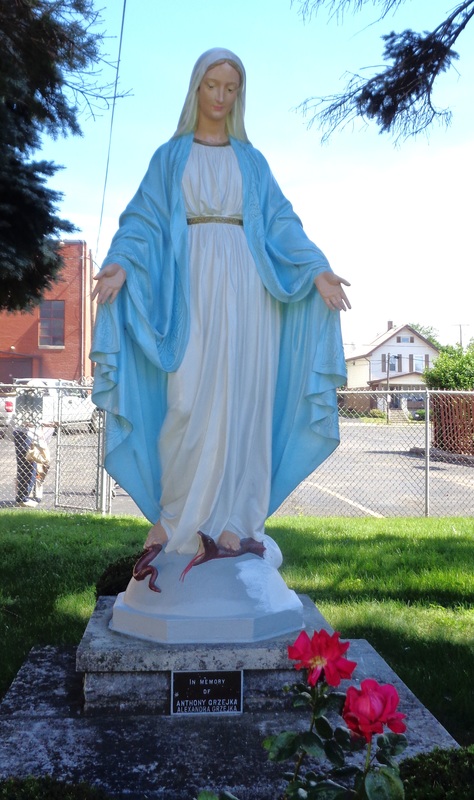